Japan. The not too distant future. A widespread dog-flu virus spreads throughout the canine population of Megasaki City. Authoritarian Mayor Kobayashi (Nomura) signs a decree banishing all dogs – strays and domesticated alike – to an off-shore rubbish tip called Trash Island. But six months later, 12-year-old Atari (Rankin) crash lands on the island in search of his dog, Spots (Schreiber).

If it was anyone else, however, the film would be a cute, cuddly, sentimental, slobbery mess. An early scene involving a canine scrap that ends with a chewed off ear quickly affirms that there will be no such puppy pampering. While Anderson is conscious of his younger audience, he’s not dictated by it. Instead, Isle of Dogs is an endearing, at times moving (but never over-sentimental) adventure tale (or should that be tail…) pumped heavy with sub-text, deadpan humour, satire, and intricate production design. A political thriller for the pre-teens, this is a film that rarely shies away from the tough subject matter thrown our way. 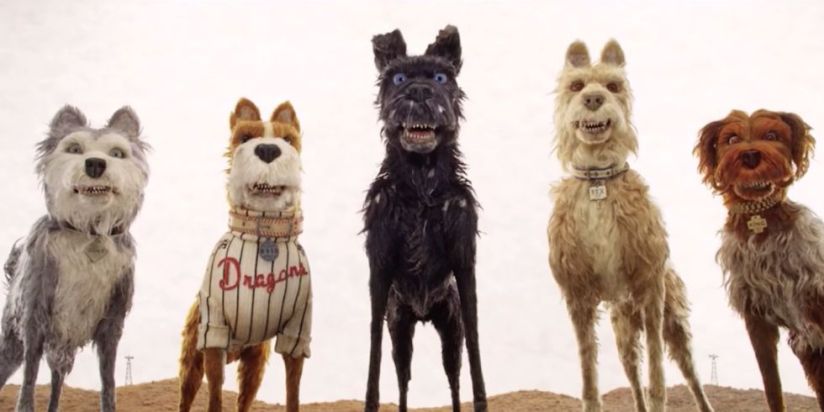 After some creative exposition during the film’s opening, we find ourselves in the company of five dogs: Rex (Norton), King (Balaban), Duke (Goldblum), Boss (Murray), and Chief (Cranston). Like a rabble of old school friends, the quintet quarrel over the mundanity of the present – the absence of decent food, the annoyance of daily life – and the pleasures of the past – each of them, with the exception of the defiant, uncompromising Chief, has come from the comforts of life as a domestic pet.

Despite roaming freely in the mounds of trash, the dogs’ lives are governed by one of democracy; and, to the point of over-thinking and bickering, each and every situation they encounter, and the resulting decision, taken to a group vote. So, when 12-year-old Atari crash lands on the island in search of his furry friend, the vote to help him is, unsurprisingly, four to one.

The irony here is that while the dogs’ collective, familial existence – however inefficient – is a far cry from the chaos, corruption and tyranny that engulfs the society across the water. Megasaki City’s villainous Mayor Kobayashi cuts an intimidating figure, and embodies the all-too-familiar traits of history’s most notorious leaders – his menacing gaze blown up onto large posters and screens echoes a sobering blend of Stalin’s Soviet state and Orwell’s Big Brother.

This is a regime built on fear, upon rigged elections, upon genocidal plans. Historical resonance and pertinent examination barks loudest here (a purely unintentional parallel to the recent discovery on a bench in Salisbury rings harrowingly poignant). Anderson’s decision to include every textbook Japanese stereotype and do away with subtitles for large portions of the dialogue risks cultural distance and divide, as much as it operates as a means of inviting audience allegiance with our canine compadres. They could just as easily be one of the many minority groups who have – and continue – to suffer at the hands of authority and prejudice. While this is a film about man’s best friend, it is also one of man’s own worst enemy: himself. 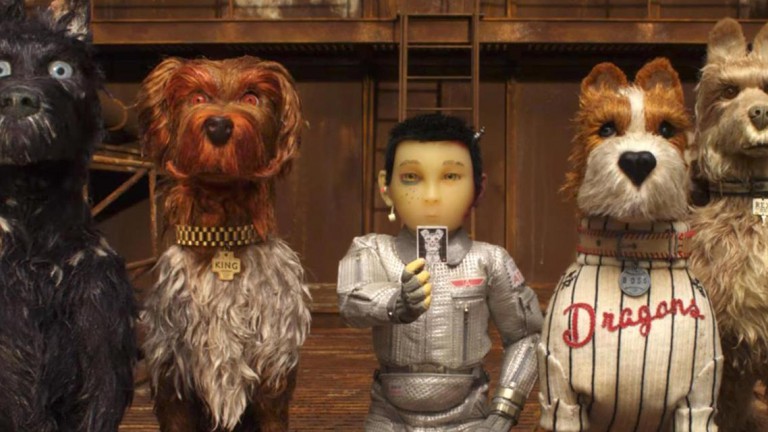 The stop-motion animation is a real visual treat. Gloriously crafted, every ingenious detail is put to the screen with colourful intricacy. And the impressive artistry mirrors the litter of acting talent lending their voice here. Aside from our central canine quintet, Scarlett Johansson, Harvey Keitel and Tilda Swinton are given the furry, four-legged treatment as a performing purebreed; the leader of a gang of shaggy, isolated, thought-to-be-cannibal dogs; and an oracle whose futuristic visions are based on what she sees on television, respectively. Both Greta Gerwig and Frances McDormand are each given human supporting roles; with the former an American exchange high-school senior who develops suspect feelings for a 12-year-old, and the latter an interpreter tasked with translating the words of the film’s Japanese speaking characters.

But in a cast billing of such pedigree, the one given the most meat with their bone is Cranston’s Chief. A dog from the other side of the tracks, Cranston’s deep, bassy tones perfectly compliment the stubborn wisdoms of this scarred stray. He is, unequivocally, the dog voice we never knew we needed.

In some delightful canine company, Isle of Dogs is a mesmerizingly odd cinematic outing.