Sawyer Valentini (Foy) is a bright business woman plagued by a troubling paranoia that she is being stalked. Seeking help at a local hospital, she involuntarily assigns herself to a mental institution for a minimum of seven days. While there, she’s convinced her stalker has found her.

Steven Soderbergh is a chameleon.

No, no, this isn’t the title of the latest Spike Jonze/Charlie Kaufmann collab. Neither is it a fact (that we yet know of).

It is, however, a pretty accurate description of Steven Soderbergh’s career. He is a director who takes pride in an ability to adapt to his surroundings, and colour himself against the many different shades of cinematic project he has explored over the years – from the big-budget money bankers (Oceans Eleven/Twelve/Thirteen; Magic Mike) to the intriguing “indie” low-ballers (Sex, Lies, and Videotape; Bubble).

In contrast to 2017’s Logan Lucky, his latest venture, Unsane – an amalgamation of conventions from both ends of the Soderbergh studio spectrum – pretty much came out of nowhere with little more than a whimper (two films for someone who supposedly announced his retirement in 2013 is pretty good going). A disconcerting, trippy trudge, oozing with experimentalism is mixed with the director’s witty studio craft; although the two often fail to fully blend, leaving Unsane a stodgy film that promises much, but never truly delivers.

Soderbergh’s decision to shoot entirely on an iPhone camera is undoubtedly the film’s primary source of intrigue from audiences, however. It might come as a surprise to many then that a film with such stylistic deviance from the norm has been given a widespread theatrical release (Sean Baker’s 2015 film Tangerine didn’t get such treatment). But the tides of cinema seem to be a’changing, and thankfully, the world of mainstream movies seems to be embracing the unconventional, the new, the bold. 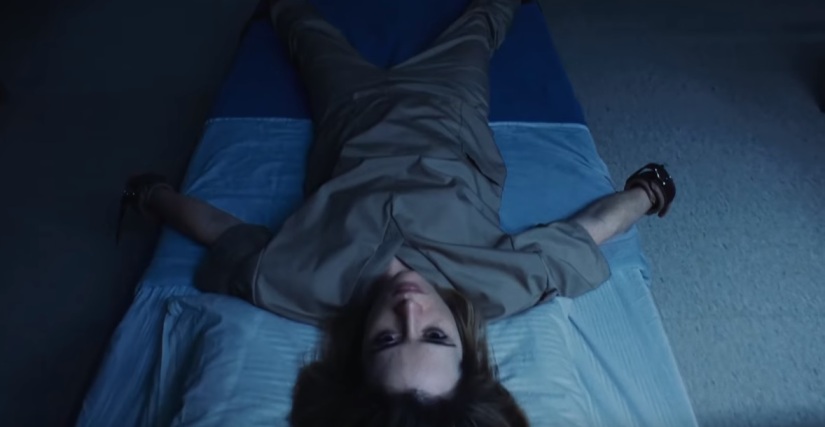 Unsane‘s grainy, intimate camera creates an effective, unnerving atmosphere right form the get go. While, at times, it might feel we’re only a few doors down from the found footage horror film (yawn!), the film’s opening third moves with intriguing pace and jagged uncertainty, neatly absent of any expositional baggage.

Foy plays Sawyer Valentini – a young professional who is trying to convince everyone, and indeed herself, that she leads a happy, independent, and functional life. Having recently relocated to pastures new, she appears to be making good impressions at her place have of work (for a boss with strongly suggested ulterior motives) and with her leafy salad lunch, she carries the internationally recognised #lifegoals marker for the Insta-generation…

But an intimate evening on the town soon points to evidence of Sawyer’s imbalance. She is a troubled individual, with a past she wants to forget, littered with demons that have hijacked her attempts at a new life – namely, a stalker she is certain remains on her tail. Commendably, she actively seeks out the help of a counsellor, although in doing so involuntarily commits herself to time at a mental institution. From there, Unsane spirals into a dark, fractured inspection of the human psyche that delves into comment on America’s health system, and the power – and danger – of the social media world that engulfs the now.

We’ve seen approaches to mental illness get all manner of treatment on the silver screen over the years. Miloš Forman’s One Flew Over the Cuckoo’s Nest delved deep into life within the four walls of a mental institution with a powerful, sympathetic eye. But in the realms of horror – think Silence of the Lambs, Psycho, and Halloween – while all powerhouses of the genre, gave things a very black and white washover – namely, mental illness equals cannibalism, major Oedipus impulses, or a fondness for very bad William Shatner masks.

The last two decades, however, have offered up far more nuanced examinations. Films like 1999’s Girl, Interrupted, and more recently, 2012’s Oscar winning Silver Linings Playbook have taken important steps to destigmatise, and add encouraging speed to the stride towards the embrace of mental health in our society.

Here, Soderbergh’s film contains elements of both the extreme and the sympathetic. As Sawyer’s condition worsens, she becomes increasingly erratic and violent. As such, we quickly begin to question everything we see – not wanting to commit anything to truth or fact. Questions are often deliberately left open-ended, and Soderbergh’s cleverly disorientating hospital layout – there’s talk of second floors and basements, opening and closing doors, but never sign of connecting corridors or stairways – subtly mirrors the unreliable, splintered psyche of the people it houses. This is the healthcare equivalent of The Overlook Hotel, complete with all manner of sinister narrative furnishings.

But Soderbergh, in his examination of the health care system, also invites audience allegiance with the hospital’s patients. Their treatment often teeters on the edge of immoral, and there are more than few obvious parallels to prison life – smuggled in mobile phones, violent altercations, and solitary confinement within a padded cell as punishment for misbehaviour. This is a film of entrapment – both literal and figurative.

Claire Foy is on impeccable form here. Still hot off the back of her portrayal as Her Majesty the Queen, she is undoubtedly Unsane’s crowning feature. Both feisty and fragile; infuriating and intriguing; likeable and detestable, she remains the film’s driving force throughout, even when the camera technology starts to show its limitations with a finale that aims high, but frustratingly stutters to a disappointing conclusion.

Unsane is a lesson in sustained discomfort that crafts an atmosphere of dread and uncertainty in its first act, that leads to a climax that appears to bow to convention.
That said, the film has possibly the best, and most unlikely of cameos in 2018 so far.

While there’s certainly a lot to get excited about, and some neat stylistic choices; Unsane is, in the end, uneven, unremarkable, and ultimately underwhelming.