When an armed robbery goes pear-shaped with fatal consequences, it’s up the widows of those killed to unpick and ultimately resolve the mess left behind by embarking on a daring heist of their own.

When asked to think about what makes up the quintessential heist flick, images of sharply-dressed, cocksure individuals getting their kicks from sipping (neat), ripping (and running), and spouting (dastardly one-liners) – usually in that order – are likely to be conjured fairly rapidly.

But putting down the Ocean’s Eleven guide to slick, stylish, sexy crime Blockbusters for just a second, and we can quickly see that the heist genre has, in fact, a rich history of finding ever-innovative ways to tell the story of people stealing stuff.

Now, try one where the heist itself feels like the least important aspect of the entire film. Cue Steve McQueen’s latest film Widows – his first since 2013’s Oscar-winner 12 Years a Slave – which generates as much intrigue from its obscure source of inspiration – a 1980’s British television series of the same name – than it does from its A-List cast. 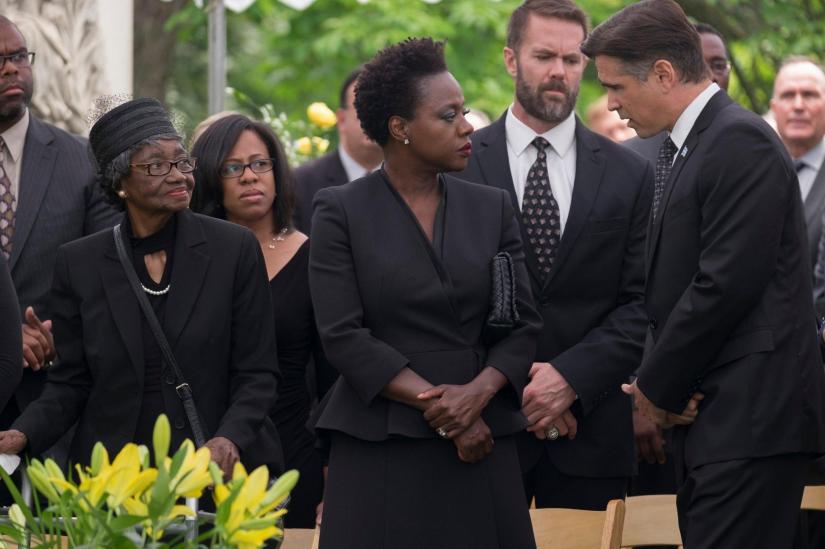 Hopping across the pond from Blighty to Chicago, Widows – co-written by Gone Girl author Gillian Flynn – begins in explosive fashion. Before we’ve even had a chance to put the phone on mute and squeeze the novelty-size Tango blast into the seat holster, McQueen immediately plonks us in the middle of a pulsating heist-gone-wrong, as a group of men – led by Neeson’s brains-of-the-operation Harry Rawlings – speed away in a van pummelled by bullets and barely holding together.

It won’t spoil things to know that it doesn’t end well for our gaggle of thieves. Within the film’s first five minutes, they’re dead. It’s a neat double-whammy of an opening, that serves to simultaneously – and succinctly – set up the film’s premise while firmly emphasising its change of narrative focus – a shift clearly in response to the discussions around gender representation in Hollywood currently.

And so, it is left to the wives of the deceased to carefully navigate the trail of deadly repercussions left by their husbands’ criminal endeavours. Veronica Rawlings (Davis) is first to taste the seriousness of their predicament and consequently enlists the help of fellow widowers Linda Perelli (Rodriguez) and Alice Gunner (Debicki) to plan and carry out the heist their partners never could. The all important fourth member is added shortly after – in the form of Bad Times at the El Royale’s Cynthia Erivo – and the quartet move to strike. 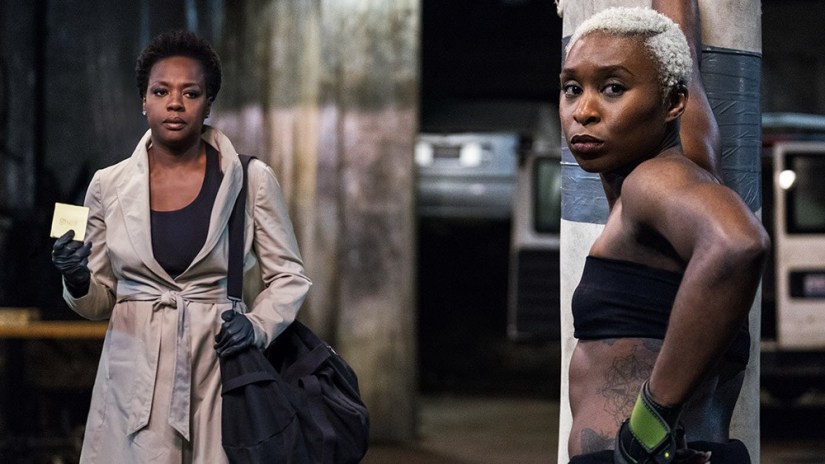 However, McQueen’s eye gazes much farther than the neat genre set-up upon which his narrative is built. Searing socio-political commentary scratches away at the surface, fleshing out Widows from merely a pulsating crime thriller with a few dubious moments, to an intelligent, conscious, pulsating crime thriller (still with a few dubious moments) that ambitiously interweaves issues of race, poverty, corruption, and violence in a setting that quickly presents itself as a microcosmic metaphor for modern-day America. Did we really expect this to be simply cheap thrills and joyous popcorn fodder? McQueen’s clearly got a message, and he’s not wasting his opportunity for us to hear it.

McQueen is equally attentive to not wasting the plethora of acting talent he has at his disposal. His female leads – Rodriguez, Debicki, and Erivo – each in very different ways, give us much to digest, consider, and contemplate. Daniel Kaluuya, in a film that does little to help repair the reputation of the authoritative male, scintillates as a cruel, calculated killer whose range of one-button-done-up jackets elicits faint comparisons to the classic, cape-wearing comic book villain – albeit an altogether grittier, more formidable, more no-qualms-about-putting-a-bullet-through-someone’s-skull version.

But it’s Davis who pips the others to the crown of standout performer, though. Her considered and layered approach helps elevate Widows a work that, above all else, commits to being a tale of grief, pain, and sadness. It’s absolutely no coincidence that we see these women as humans first, and amateur criminals second. In fact, it makes the film all the more compelling.

Underpinned by an ensemble cast firing on all cylinders, Widows is more than just a heist movie. It’s a heist movie with real heart.