In the years following WWII, a now middle-aged Christopher Robin (McGregor) struggles to balance a demanding city job with family time. While his neglected wife and daughter are away for the weekend at his old family home, Christopher’s childhood pal Winnie the Pooh – having lost his own friends – finds him in London and takes a reluctant Robin on a trip down memory lane to the Hundred Acre Wood in search of the Tigger, Piglet, Eeyore and the rest of the gang.

It goes without saying: Winnie the Pooh is a timeless classic – a cornerstone of Britain’s illustrious literary culture. In the space of twelve months, we’ve seen the bear of very little brain given the mainstream cinematic treatment not once, but twice. Both are high-profile. Both have household names and more-than-modest budgets. But these are very, very different films.

2017’s Goodbye Christopher Robin was less a bear-opic as it a was a biopic, concerned primarily with the often-troubled life of author and war veteran A. A. Milne and his young son – the inspiration behind the character of Christopher Robin – and the bittersweet return the hundred-acre success of Pooh brought. 2018’s Christopher Robin, on the other hand, has Disney at the helm. And while the world of Winnie brings with it heaps of sweet narrative nectar and whimsical charm, it never quite captures the magic of the page. 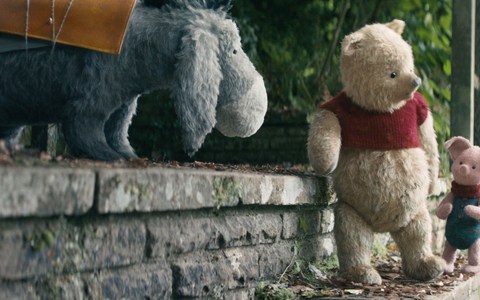 Christopher Robin opens with Winnie and his group of furry friends – as if the illustrations of E. H. Shepard had been run through a 3-D printer – gathering to bid farewell to the young titular character as he heads off to boarding school, with the promise that he’ll never forget his woodland chums. The literal departure turns out to be, unsurprisingly, an even bigger figurative one. Via some rather unimaginative narrative ellipsis, we hop, skip, and jump over poignant events in Christopher’s life – the death of his father, his marriage to wife Evelyn (Atwell) and his experiences in WWII which Disney touch on, but don’t dare to linger – to the point where a now grown-up Christopher has indeed, forgotten them.

Instead, his head is filled with all things Winslow Luggages – yep, that’s right, making suitcases – so much so, that he finds little to no time for his wife and young daughter, Madeline (Bronte Carmichael) who will soon be sent away to boarding school just like her father. The nifty, if not a little too signposted, motif of luggage signifies the life baggage Christopher carries with him, and forebodes a journey – namely, an important journey back to the woods in search of friends, and his own happier self. Cue everyone’s favourite yellow honey-junkie. 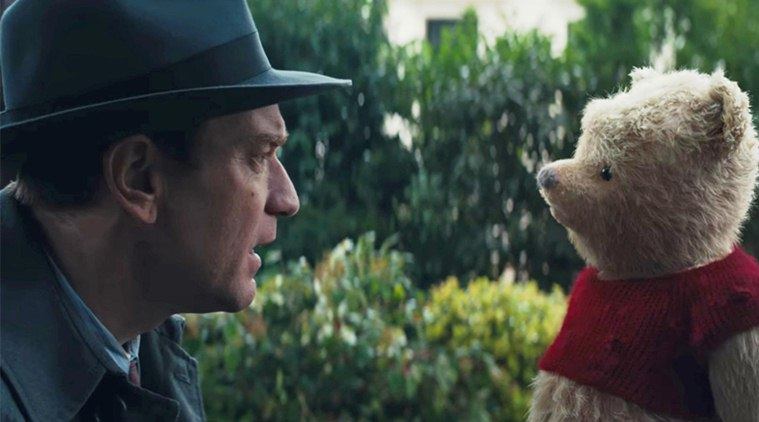 From the time he arrives in the Big Smoke, Pooh and friends set about reaffirming to Christopher what is important in life and transforming the cynical, grumpy, overworked Heffalump into the imaginative, loving friend they once knew. While its message is undoubtedly a touching, fuzzy one, and the narrative path there a well-trodden one, Christopher Robin is itself, a film that appears to be in an identity crisis of its own.

At times, the story is a warm delve into the nostalgic magic of childhood, and the joys of companionship (embodied by the oddly philosophical wisdoms of Pooh himself, voiced brilliantly by Jim Cummings). However, there is an almost despairing sombreness to proceedings – pathetic fallacy and all – at other times, particularly during those when Pooh wanders the glum wilderness alone in search of his missing friends – an awkward tonal shift that is rather clunky, clumsy and unwarranted.

In a film for, and about, families, it’s also disappointing that we spend so little time in the company of our hero’s. Atwell’s talents are wasted here as Evelyn, getting only a handful of uninspired lines, and young Madeline seems to take on narrative importance only when she goes missing while on holiday – drawing some parallels that struggle to sit well and walk a fine line over the dark chasm of distastefulness.

A muddle, but an affectionate, sugary one; Christopher Robin brings together childhood, chuckles, and the invention of annual leave…? But throw this in the ring with another beloved fictional bear with a cinematic makeover – one partial to a red hat and a connoisseur of marmalade – and there’s only one winner.