At a state-of-the-art underwater facility off the coast of China, a team of scientists uncover an even deeper section of the Marianna Trench – an area, unbeknownst to them, also home to a thought-to-be-extinct giant pre-historic shark. The team, with the help of former rescue diver Jonas Taylor (Statham), must find a way of stopping the killing machine before it devours absolutely everything.

A great shark once said; ‘Fish are friends, not food.’

Megalodons – gigantic pre-historic mega-sharks – on the other hand, are most definitely foes. And Jason Stathams are most certainly food.

And while Warner Bros. and director Jon Turteltaub bring both Meg and Stath together in a frantic, fighting, feeding frenzy, The Meg turns out to be nothing more than bland cinematic seafood that’s difficult to fully digest.

Given it’s high-concept premise – an angry, massive hunk of muscle meets a pretty big shark – The Meg is a marketing team’s catch of the day. Early posters and tag-lines had us eagerly treading water in a whirlpool of hopeful anticipation for a film that, on the surface, had us believe was a joyously knowing, self-reflexive B-movie summer blockbuster drenched in moreish sea-scenery chomping from a hip cast that included the likes of the US Office’s Rainn Wilson and Orange is the New Black star Ruby Rose.

What we get instead can barely qualify as a nibble. 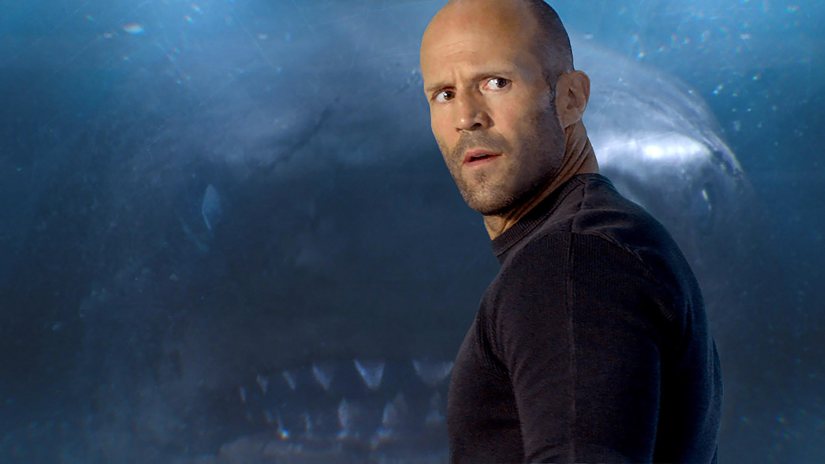 Unsurprisingly to most, The Meg’s narrative structure can be mapped pretty quickly. A group of hard-to-believe marine scientists backed by an ignorant, greedy billionaire uncover a historical discovery which turns out to be a total nightmare – a large, hungry nightmare, at that. A brilliant, but disgraced, rescue diver is enlisted, and the crew spend the rest of their time tracking, spearing, shooting, and one-lining their way towards destroying the shark. Familiarity isn’t always a terrible thing though, right?

Well, in the case of The Meg, here’s the crux of the problem: it is neither good enough, or bad enough, to be as much fun as it really should be. Sure, it has a few neat touches – Jason Statham quoting the infinite wisdoms of Finding Nemo’s Dory; the Meg popping a Zorb ball – but too often the film frustratingly takes itself far too seriously; doggy-paddling from one overly-long, splashy, set-piece to the next as it floats in an underwhelming ocean of mediocrity.

It’s no spoiler to say this is certainly no Jaws – anything with a large fin, flippers and sharp teeth will inevitably draw comparisons – but it’s no Sharknado either. Its closest relative is perhaps Renny Harlin’s 1999 sharktopian film Deep Blue Sea. It shares a similar salt-water campery and throws in the occasional twist, but The Meg lacks the same tongue-in-cheek approach (you won’t find a shark turning on an oven with LL Cool J inside this time round).

Instead, you’ll find Statham’s Jonas – a gruff, middle-finger-to-authority aquaman who absolutely doesn’t play by the rules. There’s certainly potential for great fun to be had with such a character, here. Despairingly, however, we watch on helplessly as Taylor descends deeper and deeper into archetype; from rugged outcast drowning his sorrows on a remote beach in Thailand; to brave, reckless, straight-faced hero whose unorthodox methods almost always succeed in the safe return of a damsel in distress. Despite the opening third reeling in some potentially intriguing narrative catches for him – a burning guilt from a previous mission; an ex-wife among the crew – and some loose, quasi-Ahab parallels being cast out, any unexpected character fleshing is all but washed up by the time the pre-historic killing machine shows its face.

The titular beasty itself, while impressive in size, is pumped so full of CGI that it very quickly loses all shock value by the time we get a full glimpse  – something a certain Steve Spielberg was able to maintain so effectively over 40-years ago. But, while the ‘Meg’ of The Meg is little more than the product of visual steroids, it proves once again to be the only one to act in a way that resembles anything close to naturality. It crashes, cuts and chews its way through anything and everything, while our mismatch of supposed ‘experts’ pose for selfies with shark carcasses and seem totally indifferent to those colleagues who’ve been swallowed just moments before.

This is one shark tale where you’ll actually be happy to see the fin.