When Mildred Hayes (McDormand) – an Ebbing local seeking justice for her dead teenage daughter – pays for messages on three billboards, the local police – namely the compassionate Chief Willoughby (Harrelson), as well as racist officer Dixon (Rockwell) – are provoked into action. But with few leads in the case, and a mother full of anger, what will justice look like?

It might surprise you to learn that Three Billboards Outside Ebbing, Missouri is a film about three billboards erected just outside the town of Ebbing, Missouri. The title might be matter of fact, but Martin McDonagh’s powerful, sombre, darkly comic fable is anything but.

Three Billboards opens with shots of the titular structures standing solemnly amidst a shroud of mid-morning mist. Decrepit and abandoned, they appear almost as Crucifixes against the grey (a colour McDonagh paints his narrative with in broad strokes). Despite the dawning of a new day, a lingering stagnation hangs heavy in the air, and even before Mildred Hayes plasters her three simple messages – “RAPED WHILE DYING”; “AND STILL NO ARRESTS”; “HOW COME, CHIEF WILLOUGHBY?” – across the neglected wood, it’s clear death and decay have already made their home here.

This is McDonagh’s America (or a less-than-subtle microcosm of it). A community rotting from the inside out, Ebbing is a town drenched in the aftermath of atrocity: rape, murder, and racial hatred. The trio of billboards signal our entrance into this largely inward facing existence, but also act as (un)welcome signs into a largely bleak narrative about grief, loss, and revenge. 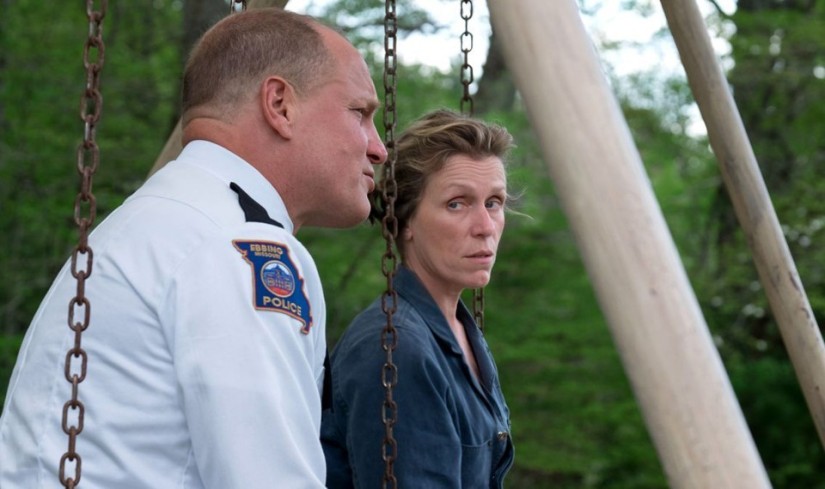 And leading the charge is Mildred Hayes (a towering Frances McDormand performance) – “What’s the law on what ya can and can’t say on a billboard?” she asks bluntly, “I assume it’s ya can’t say nothing defamatory, and ya can’t say, ‘F***’ ‘Piss’ or ‘C***’.” Foul-mouthed, clad in boiler suit and bandana, Mildred is a force of nature; resolute in channelling all her grief into her attacks upon the local law-enforcement, despite the impact on those closest to her – namely, her increasingly depressed teenage son, Robbie (Hedges).

But Three Billboards is an intricately complex tapestry, and Mildred also struggles to keep down a burning guilt, and at times shows us fleeting glimpses of her vulnerability and frailty. Harrelson’s sympathetic Chief Willoughby – the man who must stand in the way of the Hayes revenge train – is the perfect foil to Mildred’s vengeful antics. But despite their relentless sparring, there’s understanding, respect, and sympathy underlying their conflict; and it isn’t just Mildred life has dealt a cruel hand to. There’s layering and irony at almost every turn, yet McDonagh’s film rarely plays to preconception, and makes no assumptions on what grief and anger looks like. This is a film that speaks a truth, and truth is often painfully ugly.

And so begins a tale in which things largely don’t quite appear as one might first conceive. From the narrative gear changes – one of murder, mystery and unanswered questions to one of dense character study, tragedy, and even more unanswered questions – to the toing and froing of audience allegiances, to the film’s moral Rubik’s Cube, Three Billboards is all about the unexpected.

But, of course this is a McDonagh story – the man behind In Bruges – and so the unexpected, as expected, often comes in the form of shocking violence intertwined with sharp humour pitched just the right side of bad taste – a monologue-cum-rant to a local priest is a particularly risqué highlight.

But perhaps the most unexpected ingredient in McDonagh’s striking recipe is Rockwell’s maniacal, bigoted officer Jason Dixon. Living at home with his elderly, set-in-her-ways mother (echoes of Hitchcock’s Psycho neatly chime away throughout), he is a man low on IQ, but high on a propensity to lash out in fits of brutality, with complete disregard for protocol and any notion of civil right. And with damning accusations of racial torture hanging around his neck, Dixon – fiercely loyal to surrogate father-figure Willoughby – takes Mildred’s messaging much more personally than his overseer. Mother and mummy’s boy lock horns on numerous occasion, with McDonagh using their heated interaction as a canvas to splatter his film with a rather unsubtle social commentary – “So how’s it all going in the n*****- torturing business, Dixon?” Mildred quizzes him early on. “It’s ‘Persons of colour’-torturing business, these days, if you want to know” he responds.

Dixon’s character arc, however, begins to move in surprising directions as the film picks up momentum in its final third: developments that are both shocking and controversial. Wherever you chose to position yourself, there is no denying that Dixon is one of the most complicated, tortuously crafted characters in recent times. And Rockwell – who has built a career largely playing the quirky, the unhinged, the detestable – is simply electric here. Packing in almost the entirety of the emotional spectrum in little under two hours, he lays it on thick in the most wonderful way possible, and is always a joy to watch. McDormand might be the adhesive that holds Three Billboards aloft, but Rockwell is the glitter atop that really makes it shine. Together, they are sublime; fully deserving of the plaudits coming their way.

A film thick with suggestion, satire, and one slick screenplay, Three Billboards Outside Ebbing, Missouri is quite unlike anything that has come before, and anything that is likely to come anytime soon. Funny, shocking, and important, McDonagh’s film (hopefully) signposts 2018 as another landmark year in cinema.