After a teenage girl is found raped and murdered on the snow-covered plains of the Native American reservation of Wind River, Wyoming, out-of-town FBI agent Jane Banner (Olsen) is sent to find the killer. She enlists the help of local hunter/tracker Cory Lambert (Renner), who is battling with a traumatic past of his own.

Last we heard from Taylor Sheridan, he was playing West Texas cat-and-mouse in 2016’s Hell or High Water. Before that, he was venturing south of the border with all manner of fiery moral misdemeanour in Sicario. Donning the camera as well as the pen for the first time, the Stetsons have been replaced by woolly hats; and while there’s still plenty of the white stuff, it’s not as you might think. With Wind River – which premiered at this years’ Sundance festival – Sheridan has created a bleak, stripped back, neo-ice-western of a directorial debut with an impressive layering of gritty rawness and unexpected emotional weighting. 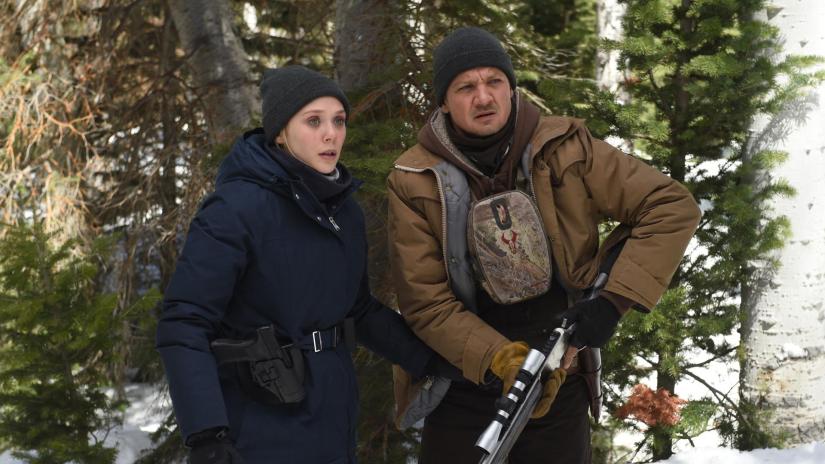 Despite sounding like the title of a new Sting album, Wind River is actually an assured and calculated thriller that gives us more than the grisly, shooty-fisty-cuffs tale of beautiful young crime-fighter connects with hunky leathered local one might expect. In an opening 30-minutes that might suggest otherwise, however, we see young Natalie Hanson (Kelsey Chow) running terrified and barefoot in the snow, where shortly after her frozen body is found by stoic, macho ranger Corey, with a particular set of unique skills that conveniently place him as the perfect accompaniment to the fiery pocket-rocket that is Olsen’s FBI agent.

“What is it that you do again?” Banner asks Lambert early on. “I hunt predators” he promptly replies. “So why don’t you come hunt one for me then?” is the response. Such a rapport gives the feel of something very familiar, as amid mystery and murder, attractive brawn meets attractive brain, and the seeds of romance threaten to blossom in an environment where little else does. And yet despite its initial conventionalities, Wind River offers up a refreshingly quiet, slow-burning character study where the main players are as much an enigma as the very mystery they hope to solve. And no-one more so than Lambert, whose initial gruffness and hardened exterior starts to slowly dent and rust to reveal a weakened image of emotional vulnerability as the town’s present starts to run uncomfortably parallel to its past. From his short-lived Bourne days, Renner is no stranger to being the former, but on this occasion reigns it in with great effect; offering a subdued performance of real nuance and maturity. While Olsen might not be the most convincing and plausible FBI agent we’ve ever seen (Banner’s some way off Foster’s Starling and Blunt’s Macer), she certainly throws her acting weight about, and the film almost always feels flatter whenever she’s not on screen.

One could say the measure of a good ol’ gun slingin’ western is its trigger-happy climatic shoot-out. While Wind River might be too slow a build-up for some, its final act is as loud, explosive, and ferocious as the genre’s big-hitters – such adjectives becoming more and more synonymous with Sheridan’s work. Given the film’s muted, patient narrative and melancholic tones that precede it, Wind River‘s bullet-riddled finale comes way out of left field, and perhaps feels slightly misaligned from what has come before. To some, such misalignment might come as a welcome gear change, and to others a conformity to genre expectation that runs the risk of silencing the film’s deeper and more meaningful messages. Regardless of which camp you find yourself in, the villainy is undeniably underdeveloped and as one-dimensional as they come, and while the gun-play is impressively shot, such scenes haven’t a patch on the quieter moments when the film, against a vast and wild backdrop, takes its time to juxtapose its underlying themes of distance and closeness.

Spearheaded by an impressive central performance from Renner, and top-notch writing from Sheridan once again, Wind River brings together the grittiness of a good crime thriller with the depth and emotional beats of a family drama. A plethora of wolf metaphors aside, Wind River is easily one of the best character-driven thrillers in recent years.