1967, Detroit. As tensions between African Americans and local police spill over into what will become the 12th Street Riot, a task-force raids The Algiers Motel in search of a supposed sniper. When their search appears unsuccessful, a night of terrifying race-hate and violence ensues.

Kathryn Bigelow is no stranger to throwing her audience in at the deep end. From immersing us in the psychological Rubik’s Cube of life in a conflict zone in The Hurt Locker, to dragging us on the decade-long manhunt for Bin Laden in Zero Dark Thirty, she has no qualms in giving us undiluted access into the complex characters and high-tension environments they find themselves in. Her latest, Detroit, is no exception; aggressively shoving us down burning streets and in and out of dimly lit motel rooms as the titular city’s aptly named ‘long hot summer of 1967’ shows its fiery violent side.

Splicing together Bigelow’s camera work with archive news footage, Detroit’s initial backdrop setting indicates a rather formulaic docu-drama exploration of the violence that befell the Michigan city in July of 1967. Generic and necessary as it may be, there is an added magnetism to the way in which both Bigelow and long-term collaborator Mark Boal open the cinematic door to such a past. An unlicensed night club celebrating returning black veterans is raided by police and from the resulting arrests, a mob of angry African American onlookers commence the 12th Street Riot. Visually, there is very little time for gentle accustoming to such a time as the beatings and injustice begin almost instantaneously, and narratively there is a real urgency to set the precedent for what is to come – as men return from one war, they find themselves firmly caught amidst another.

In an incisive and intelligent establishing of character, Detroit’s main players are fed to us patiently in its first hour. Rather than starting out as the vessels through which the audience enters such a world – as might be the temptation – it is through such a world that they are brought to us: Poulter’s bigoted cop; Smith’s smooth, confident Motown singer; and Boyega’s righteous private security guard. Somewhat inevitably, such attentiveness to character construction means the narrative threatens to lose focus, and Bigelow could do with tightening her editing grips at times; however, all nit-picking is ultimately forgotten as she delivers Detroit’s poignant, harrowing, but undoubtedly memorable showstopper.

Within the confinements of an unglamorous hotel annex, we, as viewers, are thrust aggressively from the role of 21st century retrospective viewer to that of silent witness as the violent bloodshed unfolds before us in real time. Unflinching and unforgiving, Bigelow gives us nowhere to hide as she ramps up the tension to eleven as Poulter and co. begin their ruthless search for a sniper they are convinced has taken refuge. At times, it is an unbearably tough watch, and the brutality and interrogation tactics teeter on the realms of horror – a sorority siege of overwhelmingly terrifying realism, if you will. One will do well to find a more tense, raw, and emotionally impactful 45 minutes of cinema this decade.

And such a moral minefield of powerful visual discomfort stems almost exclusively from the magnetic performances of Bigelow’s largely youthful cast. The most eye-catching is undoubtedly the electrifying Poulter: an inspired choice as a baby-faced lawman masking an incomprehensible hatred and racism; but Boyega, who takes an unexpected back-step (don’t let the movie posters fool you), gives an equally impressive, if not somewhat understated performance of real maturity. Twenty-year old Algee Smith – a virtual unknown by comparison – displays both his commendable acting and singing chops as Larry Reed, and more than holds his own as Detroit’s most developed, complex, and important ingredient. 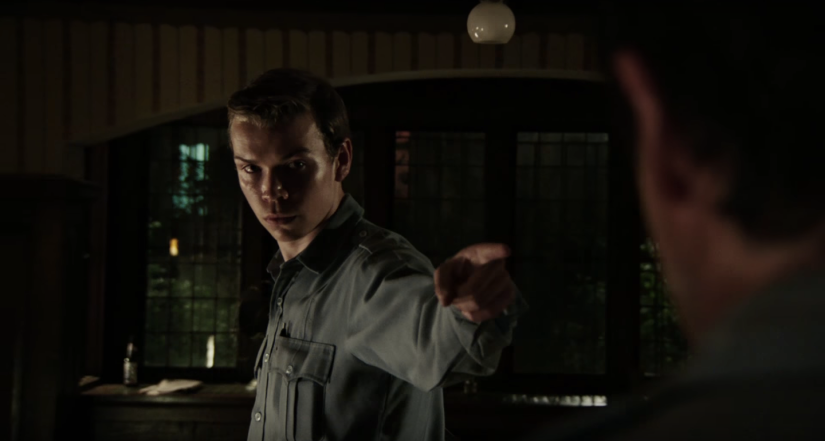 As the intensity inevitably wavers as the film turns from house of horror to courtroom drama in its final moments, Detroit’s near two-and-a-half-hour run-time begins to tell. And, yet, while it drags and occasionally runs the risk of exploiting the very violence it wishes to condemn, Bigelow’s film also maintains a constant stream of powerful timely and pertinent venom that smears the film’s mirror to the past with blotches of the present.

Gritty and merciless, Detroit is an accomplished work from one of the most renowned filmmakers working today. While not Bigelow’s best, Detroit nevertheless acts as an important reminder to us all of that classic History classroom wall quote: ‘Those who cannot remember the past are condemned to repeat it’.