In an opening reminiscent of the moment Omar Sharif rides into view on camelback in David Lean’s eastern epic Lawrence of Arabia, The Lighthouse begins with a lingering long shot of a solitary, distant steamboat on the sea, engulfed in thick fog. The disconcerting, groaning bellow of the ship’s horn sounds as the film cuts to a small, remote island, and to the haunting image of two gruff figures stood at the door of a rickety wooden shack staring out silently toward the vessel slowly disappearing on the horizon. An aura of disquieting dread creeps in as quickly and as tangibly as the salt air that rushes through their untamed hair, before both men quietly stagger up the creaking steps of their decrepit abode to the cramped bed chamber. Then, one of them farts.

And so begins the striking maritime yarn that is Robert Eggers’ new film: a brooding, briny, black and white nightmare about two lighthouse keepers with a dwindling grip on their own sanity. Peppered with fleeting moments of toilet humour and the occasional suggestion of sirloin sex, the anticipated follow-up to The Witch — Eggers’ devilishly accomplished 2015 debut — is a rough, relentless, swirling storm of fear, facial hair and flatulence.

The men in question are Ephraim Winslow (Pattinson) and Thomas Wake (Dafoe). The former is a young, drifting labourer, recently leaving behind employment as a timber man for a four-week stint at the lighthouse. The latter is a seasoned, weathered “wickie” and a once able-bodied seaman who has since become something of a quasi-Ahab, self-elected authority figure on the rock. Both are unrefined. Both are clad in dishevelled wool. Both cast increasingly stern, distrusting gazes at one another as the pair slowly descend deeper and deeper into the wild waters of madness.

Together, against the backdrop of Jarin Blaschke’s beautifully bleak monochrome cinematography and the claustrophobia of the film’s 1.19:1 aspect ratio, the tides of Winslow and Wake’s relationship sway turbulently between that of comradery, hatred, and father-son intimacy. Crucially though, their disconcerting excursions remain wholly ambiguous. In Eggers and brother Max’s richly-authentic, occasionally impenetrable screenplay — much of which they lifted from historical texts and diary entries — there are few clues to be found that signal the source of the encroaching terror. Are there supernatural forces at work on the island? Is the fallout of toxic masculinity butting heads spilling out onto the shores of insanity? Or, in fact, is any of it real at all? 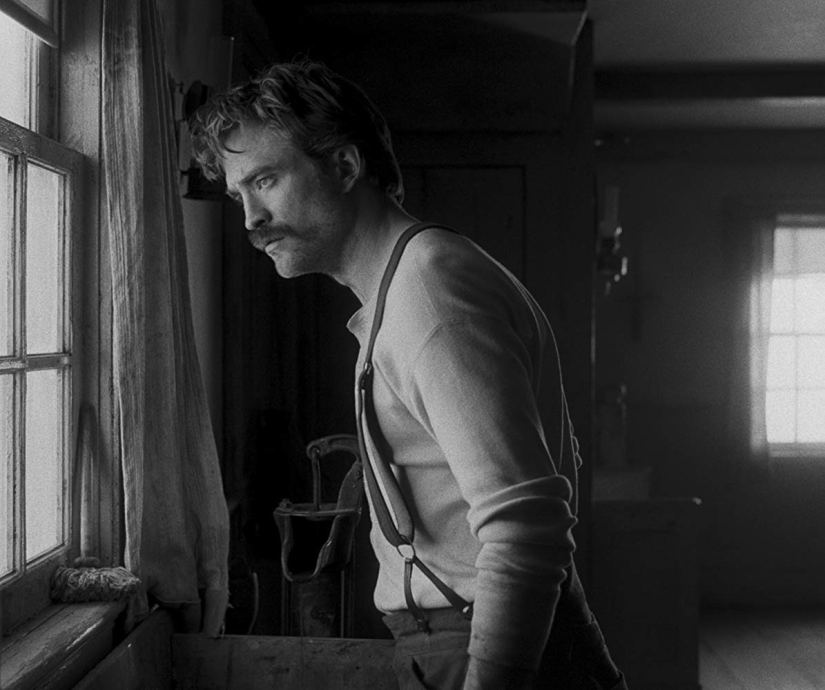 In the end, Eggers’ refusal to delineate between dream and reality renders any conclusion obsolete. Instead, it’s the enjoyment derived from being embroiled in the always fierce, often frantic, and sometimes non-sensical interactions of The Lighthouse’s central duo that is its most effective feature. Pattinson and Dafoe are hypnotically unhinged, blending humour and horror as they scream drunken ramblings as old tales are told, wail hopelessly into the night as beans are spilled, and exchange hefty blows by dim candlelight. Of the two performances, it is Pattinson, giving a career-best performance, who soars highest, imbuing his character with just the right pinch of mystery that any motives and morals he appears to hold might just prove as unstable and unreliable as the stormy weather that looms overhead.

While events always threaten to boil over into something of an Aster-esque finale, Eggers’ film remains suitably, and sensibly restrained, with the roaring, grinding jolts of Mark Korven’s evocative score and Louise Ford’s increasingly fractured editing doing much of the heavy lifting in the absence of narrative coherence. It might not be laced with the same raw, stewing, under-the-skin-burrowing imagery that defined his first film, but The Lighthouse is a work as spellbinding and sinister as the very structure after which it is named.