“For 27 years” sound the eerily croaky tones of Bill Skarsgård’s Pennywise over It Chapter Two’s trailer. “I dreamt of you. I craved you. I’ve missed you.”

For fans of Andy Muschietti’s 2017 box-office sensation It, the feeling was most certainly mutual. An engrossing upgrade on an early ’90s TV movie adaptation made memorable by Tim Curry’s unnerving performance, (the first half of) Muschietti’s take on Stephen King’s popular novel was a horror film with real heart: a Spielberg-meets-Elm Street coming of age tale with poignant themes, a wining young cast and slick scares. Thankfully, audiences have had only two years to wait, and not the best part of three decades, for the next instalment of murderous clownery.

But if part one played things a little too close to the side of safe, Muschietti well and truly kicks off the novelty clown shoes and shakes the shackles for part two. Jumping to 2016 from It’s 1989 setting, a vicious, deeply unsettling homophobic attack sparks the reluctant return of the now-adult members of the Losers’ Club to Derry. After receiving a call from Mike (Mustafa), the only one to have remained in their childhood town, the group reunite for the first time in 27 years. But things have changed. They’re distant, in every sense of the word, each with their own lives, relationships and set of repressed memories. Sensitive Bill (McAvoy) is now a screenwriter; Beverly’s (Chastain) relationship draws painful parallels to her past; Ben (Ryan) is a chiselled success story; Eddie (Ransone) works in risk assessment; Stanley (Bean) still lives in fear; while wise-cracking Richie (Hader) now wise cracks for a living as a stand-up comedian.

The re-casting is an immediate joy. Every one of the actors brought in to play the Losers’ adult counterparts seems a perfect fit. Each is given ample time to help fill in the 27-year blanks too: to one another, they maybe out of sight, but their shared experience in the dingy sewers of Derry as middle-schoolers, although hazy, is never truly out of mind. 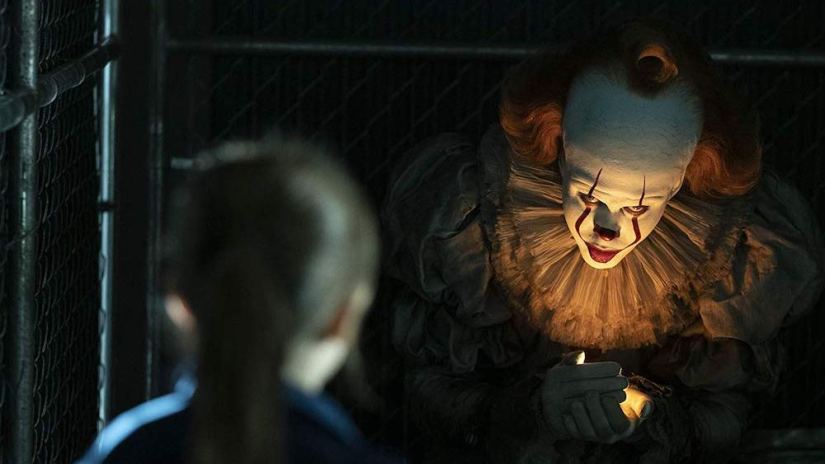 And so a quirky catch-up quickly takes a turn for the terrifying as the answer to the question of why they’ve been summoned back to Maine soon comes to light. Pennywise is back and on the hunt. And the Losers made a pact. But, not only has the dancing clown returned for a second spin, he’s now more menacing than ever.

And a hefty chunk of the film’s second act is dedicated solely to confirming that very point. Taking all manner of grotesque, ghoulish form — everything from park statues to seemingly sweet old ladies — Pennywise terrorises each of the Losers in a multitude of devilishly hideous ways. While these scenes, in the grand scheme of things, aren’t much more than glorified (and gore-ified) set-pieces serving very little narrative purpose, they are gloriously (and gore-iously) inventive; moments that affirm Muschietti as one of the most visually creative monster-makers around.

But, if the repetitive nature of such sequences increasingly dilute the shock factor they emit, they allow the talents of Skarsgård to soar like a (red) helium balloon. Even in the company of both McAvoy and Chastain, Skarsgård is the film’s stand out performer. Given full creative license, his Pennywise, equipped with the same childlike demeanour, unhinged stare and disturbing drool, is truly the stuff of nightmares. It’s his presence that buries deepest under the skin — one scene, not too dissimilar from Chapter One’s infamous storm drain sequence, sees Pennywise engulfed almost entirely in shadow as his eye rolls ever so slightly off centre, and there isn’t likely to be a moment quite as sinister all year.

Tonally, the film feels far less assured. Despite the charm of its central heroes, the film wades awkwardly between humour and horror, while often struggling to keep from crumbling under the weighty silliness of its own story. Plus, with a running time that closes in on 3-hours, our second stay in Derry, with its interjecting timelines, is a rather drawn out one — namely, a wobbly final act that while both loud and frenetic, rarely reaches the intended emotional depths. It Chapter Two, instead, seems content to simply float.