Part way through Once Upon a Time in Hollywood (ellipsis optional), Margot Robbie’s Sharon Tate charms her way into a matinée showing of The Wrecking Crew. In the darkness she sits, smiling, her dirty feet resting on the seat in front, gazing up through large-rimmed spectacles as the real-life Tate plays the role of the “klutz” on the illuminated screen. In the hands of anyone other than Quentin Tarantino, such a scene might buckle under the sheer weight of its own self-reflexivity. As it is, the moment is as heart-warming and as heart-breaking as anything he has ever put to celluloid.

It’s also a scene that perfectly encapsulates the tone of the auteur’s star-studded ninth feature film. This is a nostalgia trip with a Tarantino twist, where fact meets fiction, fairytale meets film industry, and feet meet a plethora of ‘fucks’ as a sun-soaked ‘60’s L.A. supplies the dazzling backdrop for the director’s ode to an age of classic movie making and significant socio-cultural transformation. 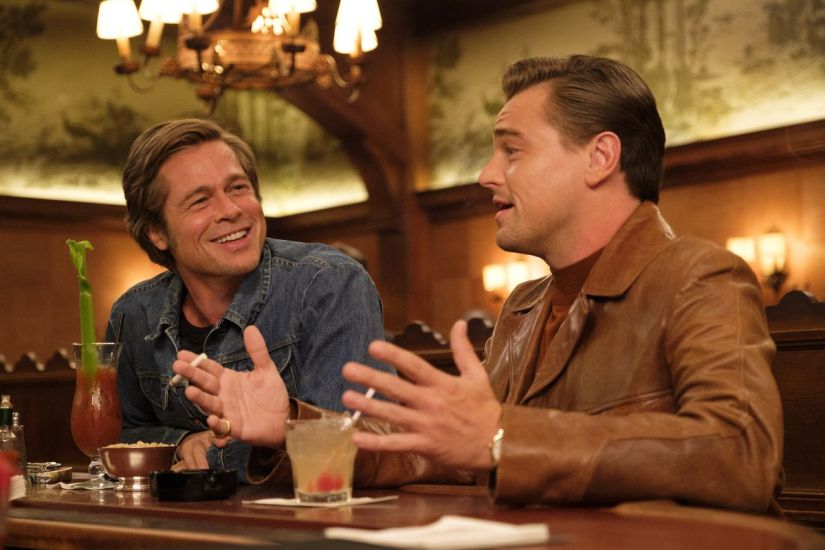 Change is everywhere in the City of Angels. Hippie culture is shaking things up in Tinseltown. But, for actor Rick Dalton (DiCaprio), change is a very unwelcome visitor indeed. A frank meeting with eccentric casting agent Marvin Schwarz (a wonderfully off-piste Al Pacino), hits the once Hollywood hot-shot and darling of Western television series Bounty Law with the sobering realisation that his days in the limelight might be numbered. His recent projects — brought in to play the villain, or ‘the heavy’ — are steadily denting his leading-man persona while the younger, more in-demand newbies are climbing the proverbial ladder to stardom.

A permanent fixture at Dalton’s side is Cliff Booth (Pitt): Dalton’s stunt double-turned-gofer whose career is seems equally stifled over suspicions he killed his wife. While Dalton — living next door to Roman Polanski (Rafał Zawierucha) and Sharon Tate in the Hollywood hills — is the imploding, self-centered ying on the brink of becoming a washed-up has-been, Booth is the calm, charismatic yang living in a trailer behind a drive-in cinema with his pet dog, Brandi. Opposite in almost every conceivable way, their fates are invariably linked: “More than a buddy; less than a wife”. Meanwhile, the seeds of a far more sinister relationship are also being sewn in the Californian sun: Charles Manson and his band of young followers.

With such a broad, colourful canvas to play with, it’s something of a surprise that only a splattering of Tarantino-isms permeate his venture back to the golden age of cinema. In fact, for large periods, Once Upon a Time in Hollywood doesn’t feel like a Tarantino film at all. A spectacularly shot and wonderfully scored love letter, Tarantino’s vision is imbued with the usual pop-culture drenched detail; however, this is a filmmaker in a more mature mood. Absent of the frantic energy of Pulp Fiction’s scrambled chronology and, for two thirds at least, the violent excess of a Django or a Kill Bill, Once Upon a Time in Hollywood is a patient, prudently layered, at times touching meta Western buddy movie about the end of eras, both literal and figurative.

It doesn’t all work as well as Robert Richardson’s cinematography, however. At 161 minutes, Once Upon a Time in Hollywood is an uneven slog that suffers from Tarantino’s seeming inability to know when to say cut. A handful of scenes are painfully and aimlessly drawn out, while others serve very little purpose at all — namely, a sequence involving Booth and Bruce Lee that feels little more than a cheap shot at the late martial arts star.

This is a narrative of varying success that piques and troughs with equal moments of joyful inventiveness and searing self-indulgence. At its worst, we’re asked to sit through an overly-long sequence in which a snarling, despairing Dalton struggles to remember his lines. At its best, Tarantino is deceiving us every which way during Booth’s tension-riddled impromptu visit to the infamous Spahn Ranch.

Feeling equally less polished are a collection of Tarantino’s supporting characters. With the story strangely keeping Tate at arms length, disappointingly limiting her to only handful of gleeful smiles and some rather authentic boogieing, Robbie does wonders with very little. Utterly convincing as a product of the time, Robbie slots seamlessly into the conflicting ambiance of 1960s Los Angeles, imbuing her character with both a sharp awareness and a tragic innocence. Her’s is by far the most compelling performance of the lot.

But, in a film primarily concerned with leading men, it’s neatly apt that both of Tarantino’s should be on scintillating form. But while DiCaprio has arguably the showier of the roles — one moment he’s quietly lamenting his wobbling career to an 8-year old co-star, the next he’s having a full-on fit in his trailer, berating himself for drinking too much and threatening his reflection with suicide — it is, ironically, Pitt’s Booth who quietly steals the show.

With comedic credentials that have often been unfairly overlooked — you need only look as far as Burn After Reading to see just how funny he actually is — Pitt supplies the subdued sparkle. Blending loveable charm with sharp wit and a cocksure coolness, it’s a look that, just like the short-sleeve, yellow Hawaiian shirt sported throughout, suits him down to the ground.

But this is, and was always going to be, Tarantino’s show. Perhaps more so than any of his previous works, there’s a palpable sense of something very personal at play here. He’s longing for the ways of the past as much as he is simultaneously celebrating and poking fun at them. And, in that sense, Once Upon a Time in Hollywood is both the most, and the least, Tarantino film Quentin Tarantino has ever done. It’s certainly worth your mother fucking time.