Mindhunter is something of a juxtaposition. A drama that documents, in a most literal sense, the actions of some of America’s most notoriously violent serial killers, it might come as a surprise that you’ll find about as much bloodshed as in an episode of Homes Under the Hammer.

That isn’t to say that Netflix’s 10-part true-life crime series — marshalled by darling of the thriller David Fincher — isn’t without its fair share of disturbing imagery. Quite the opposite, in fact. But, in an age of TV defined by striking visual flair, by Dragons and Demogorgons, Mindhunter is a different beast altogether.

The show, which returns for a second season this week, follows Holden Ford (Jonathan Groff) and Bill Tench (Holt McCallany): two agents from the behavioural science branch of the FBI, who, in the early days of criminal profiling in the late 1970s, begin interviewing a number of America’s most notorious incarcerated murderers. Their goal: to gain a greater understanding of those driven to commit such heinous acts. They want the whos, the whats and, most challengingly, the whys.

But, extracting any such information that might be considered useful proves the characters’ central dilemma, even with the assistance of Psychology Professor Wendy Carr (Anna Torv). As the very title suggests, this is an exploration into the darkest side of psychology: an often painfully patient process where every method, every motive, every hypothesise is as grey as the show’s noir-tinged, drearily-dressed production design.

Even with the hefty budget and the big name — Fincher directed the series’ first and last two episodes — Mindhunter never succumbs to the screeching sound of rubber on tarmac during a pulsating car chase or a nail-biting showdown with a knife-wielding killer. On the contrary, the aim here isn’t to catch the killer — the murderers are already imprisoned. Rather, it is to distinguish patterns, to create profiles, and, ultimately, stop prospective bogeymen at source.

Fincher’s influence in the project is pivotal: as with Zodiac, this is a meticulously plotted crime drama quite unlike anything on the small screen right now. A dark and disconcerting ‘talkie’, Mindhunter is a series that runs in direct opposition to the cardinal rule of storytelling: show don’t tell. Here, words, and not scenes of extreme violence, are the most potent weapon; where coffee-fuelled diner discussions and probing prisoner interviews are as captivating as any Battle of Winterfell.

It’s at times a challenging test of patience. There are no neatly packaged flashbacks to supplement the shocking accounts of those being interviewed — scenes that might otherwise undermine the elusiveness of reliability and truth. Inconclusion is, ultimately, Mindhunter’s most engrossing feature, exemplified through the actions of the youthful, ambitious Ford — a character not too dissimilar from Zodiac’s cartoonist code-cracker Robert Graysmith (Jake Gyllenhaal). It’s his obsession with uncovering something revelatory, while straddling ethical and moral boundaries, that eventually sees him immersed within the world of serial killers so blindly, it takes a too-close-for-comfort brush with serial killer Edmund Kemper (Cameron Britton) in the series finale for him to realise the danger he’s inadvertently put himself in. 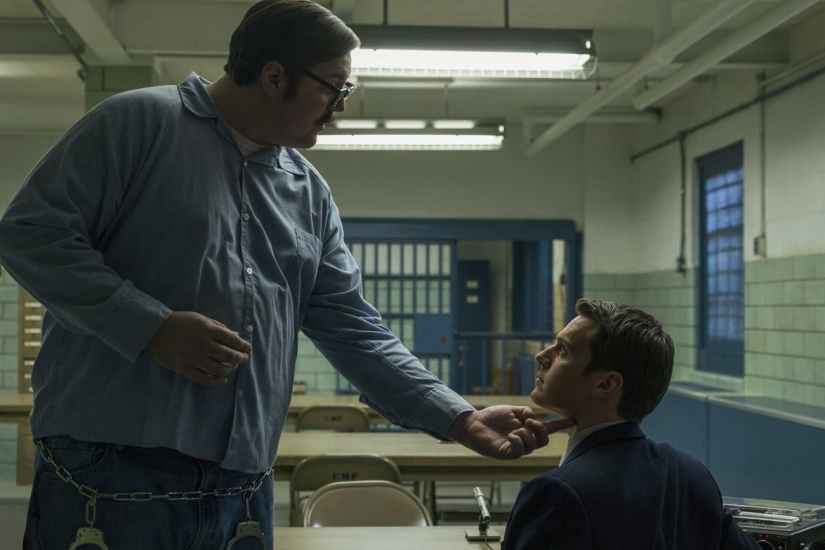 But Ford is just one example of how Fincher’s eye for crime drama — and a dialogue-driven script — has always been firmly fixed upon his characters. Never one for visual trickery or flashy self-indulgence, it is Mindhunter’s engrossing characterisation that repeatedly catches us off guard. Suitably intriguing are each of the series’ protagonists; but, like Seven, it is the handling of Mindhunter’s monsters that lingers longest in the mind.

None more so than Britton’s Kemper: a towering, stoic presence convicted of killing 10 people in little over a year in the early ’70s. Extensively interviewed by Ford and Tench throughout the series, his remorseless recounting chills to the bone. However, it is his intelligence and articulation, and the ease at which Ford is seduced by his insight, that is most unnerving. Mindhunter reminds us that it isn’t the shocking details pertaining to the crime — however graphic — that make such individuals the subject of both disgust and allure; it is that deeper impulse that drives some men to take another’s life.

Season two might hold more of the answers. But are we really sure we want to find out what they are?

Mindhunter Season 2 is released on Netflix on 16th August.