In an age of Twitter, Instagram and YouTube rabbit holes, you don’t need to go far to find a plethora of peanut stands or hear a multitude of rubber bands, and you’re probably only a hashtag away from catching a glimpse of a polka dot railroad tie. However, even in 2019, there remain some things we thought we’d never see. One such phenomenon: Tim Burton doing Dumbo.

Few tasks feel as hefty. Remaking a film with the weighty legacy of Dumbo behind it is no simple endeavour. But, with a renowned nous for crafting joyously macabre takes on conventional tales, there was always a chance Burton could make this work. After all, as many who watched the 1941 film as a child will attest to, the heart-warming story of an adorable flying elephant is lathered thick in the kind of nightmarish terror Burton seems to live for. Parental separation, the circus, clowns and pink pachyderms — as much as it is a celebration of the outcast, Dumbo is our deepest fears on parade.

Sadly, the results are largely underwhelming. The strength of Disney’s animated original is that it takes a simple story and within just over an hour makes it truly wonderful. Burton’s retelling takes that same simple story, slaps an additional 48 minutes on top and fills it with convoluted sub-plot.

Alongside the tale of a large-eared elephant learning to fly (literally and figuratively), there is Colin Farrell’s amputee WWI veteran and talented equestrian performer Holt Farrier, who, along with his young children (Parker and Hobbins), see the potential in Dumbo no one else can. Burton pegs an intriguing parallel between Farrier’s disfigurement and outcast animal in the film’s early stages, but it’s an idea that never really gets off the ground. Instead, the true focus seems to be upward. As the eponymous hero soars, not only do the profits of small-time circus owner Max Medici (DeVito) rise, but also Burton’s visual pallet. From dazzlingly colourful backdrops to towering big tops, the production design really begins to take flight once Dumbo’s unique talents inevitably attract the attention of industry big-hitter V. A. Vandevere (Keaton): the greedy owner of mammoth amusement park Dreamland. Fame and fortune beckon; but, invariably, that’s little match for the most important ‘f’ in all of this: family. 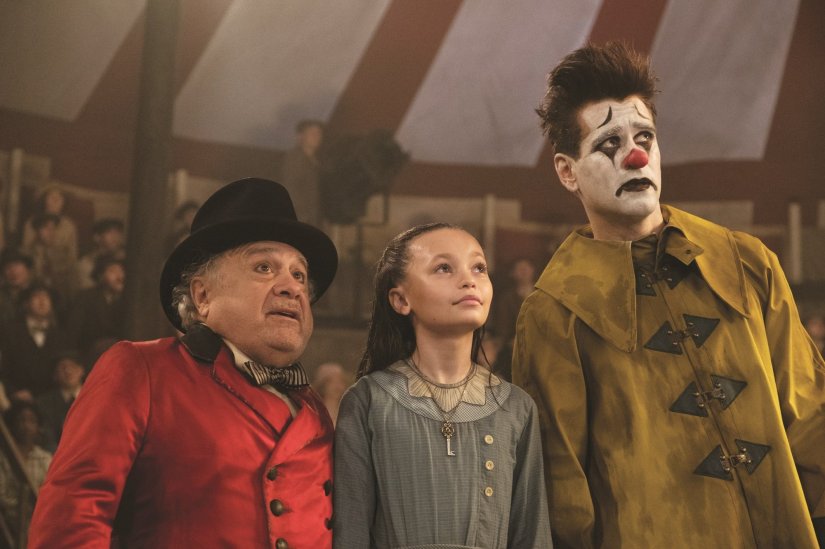 Disappointingly though, what it might offer in rich, vibrant live-action gloss, Dumbo lacks in an engrossing, heartfelt core. Dumbo himself, with those large, expressive eyes, is undeniably cute; but, even with the combined efforts of Farrell, an underused Eva Green and eccentric double-act of DeVito and Keaton, Burton’s human characters fall frustratingly flat. Things feel a tad too superficial to really evoke genuine emotional investment here, helped in no small way by the real elephant in the room: the unshakeable irony of Disney, given their own recent activity, releasing a film about overcoming the corporate bigwig.