A hefty barrage of backlash seems to be a prerequisite of any Hollywood studio wanting to dabble in a live-action Manga adaptation these days.

Recent discourse around diversity and the controversy concerning contemporary ‘white-washing’ in Hollywood has landed recent reboots, such as 2017’s Ghost in the Shell, firmly under the scrutiny of viewers complaining of the film’s ill-judged prioritisation – placing household names above any whiff of faithful representation.

To say, therefore, that Alita: Battle Angel is a risky enterprise — even with the star power attached to it — would be understating it somewhat. Despite being directed by Robert Rodriguez — whose diverse talents offer a back catalogue that includes both Sin City and the Spy Kids series — co-written by the king of the (sci-fi) world James Cameron, and co-produced by Cameron and producing powerhouse Jon Landau, the film hasn’t been without its fair share of problems.

Production hell; pre-release scepticism; trademark lawsuits: the road to get Alita: Battle Angel — an adaptation of a popular Japanese publication — onto the screen has been a long and bumpy one. It is perhaps rather befitting then that our entry into Rodriguez’s world comes via a short, written prologue informing us we have travelled 500 years into the future, to a world left devastated by an earth-shattering conflict that took place 300 years previous. 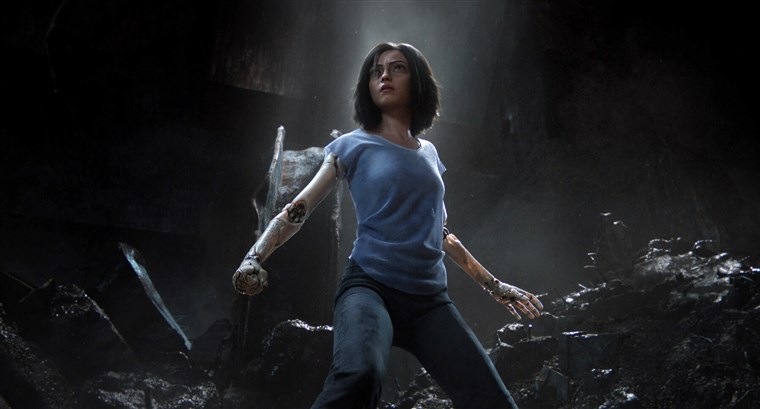 The story of Alita (Salazar) — an abandoned cyborg with no memory of her past — unfolds in the shadow of the last great airborne civilisation Zalem; down the crowded, decrepit streets and within the dingy social hangouts of Iron City: a lawless junkyard metropolis, policed only by bounty hunters, known as ‘Hunter-Warriors’, looking to make a quick buck apprehending (by any means necessary) wanted criminals. Recovered and repaired by compassionate scientist Dr Dyson Ido (Waltz) – a cross between Dr Frankenstein and Pinocchio’s Geppetto – Alita’s journey quickly becomes one of self-discovery; an odyssey in which she will learn of the unwritten rules that govern Iron City and of the legendary game Motorball — think Quidditch meets Mario Kart meets Transformers.

Despite its literary foundations, Alita: Battle Angel is permeated by an amalgamation of James Cameron’s most celebrated body of cinematic work. Juggling murderous cyborgs, kick-ass heroines, a mysterious ‘sky’ (wink, wink) society headed up by an equally enigmatic leader, and a central romance between two people from different worlds, the film has ideas aplenty. It’s ironic then that scarcely do such exemplary inspirations co-exist in harmony, resulting in a frenzied mess that, while visually impressive, is narratively unstimulating.

In Alita’s search for identity — one that sees her go toe to toe with a plethora of one-note villains, including Ed Skrein’s ruthless cyborg playboy Zapan and Mahershala Ali’s scheming entrepreneur Victor — Alita: Battle Angel is never quite sure what it wishes to be.

Science-fiction has always had the knack of remaining notably pertinent and, at its core, this is story that — when stripped of its robotic limbs and space mumbo jumbo — works as a timely encapsulation of the current conversations going on in Hollywood. Cameron’s lauded sci-fi filmography (The Terminator; Aliens; Avatar) is testament to his championing of the central female hero. And by flipping the original title — from Battle Angel Alita to Alita: Battle Angel — Alita, and traces of the #MeToo movement, is planted at the forefront of a narrative where she must evade her own destruction at the hands of several dastardly males.

But in a film as frantic as a game of Motorball, any of the more meaningful messaging is muted in a crowd of clunky dialogue and cliched sub-plots. The action sequences are a highlight — if not a tad repetitive — but it is Salazar (perhaps best known for her supporting role in the recent Netflix phenomenon Bird Box) and her wide-eyed hero (quite literally) who are the shining stars of this galactic adventure. Transformed by performance capture technology, it is Salazar’s grasp of Alita’s intangible blend of naivety and moral assurance that is her finest weapon, giving us a protagonist we can instantly cling our allegiances to, and one cut from the same classic cloth that bears the immortal names of Ripley and Sarah Connor.

A fleeting cameo at the finale hints that this won’t be our last trip to Iron City or indeed our last adventure with the Battle Angel. If they can crank things down a gear or two, this might just be the beginnings of a kick-ass new genre franchise.