Somewhere in the cinematic genre space between avant-garde arthouse satire and the B-Movie horror flick, you will likely find Velvet Buzzsaw.

Neltflix’s newest – and strangest – original feature kicks off their post-Roma heavy-hitters by proving that even the world of high-end art isn’t entirely immune to some darker shading.

Nightcrawler writer/director Dan Gilroy fuses a peculiar blend of characters and conventions to boldly concoct what is, on paper (or canvas) at least, an ambitious, audacious mash-up of low and highbrow. This is a film about art where the art, quite literally, fights back – dishing out some pretty merciless punishment upon those who greedily seek to profit from it. Think Final Destination at the Tate Modern.

And in any film that threatens to rip itself from the hinges, it should come as little surprise that previous Gilroy collaborator Gyllenhaal is somewhere in the frame. Forging a successful career largely playing characters we’re not sure we should be liking, Gyllenhaal leads an impressive ensemble of established and up and coming actors as the suitably detestable Morf Vandealt: a snooty but renowned Los Angeles critic whose often-scathing reviews have the power to make or break those embroiled in the cutthroat world of contemporary art.

One night, his friend and agent Josephina (Ashton) – who also happens to work for Rene Russo’s Rhodora Haze: an icy, officious art gallery owner whose shoulder bears a tattoo with the titular text – happens upon the sinister collection in question when she finds an upstairs resident dead.

Naturally, the obvious omens are ignored, and, with only an enigmatic name – ‘Vetril Dease’ – to go on, Josephina does what any compassionate, aspiring art person would do and turn them into profit. But green isn’t the only colour on the table when other renowned, and equally unlikeable, figures of the LA scene begin mysteriously, and literally, bleeding for their art.

“All art is dangerous” bluntly states Haze part-way through proceedings, and it’s this mantra that Velvet Buzzsaw appears to take at face value. But, despite an edgy high-concept premise, intriguingly dark undertones and one hell of a cast, Velvet Buzzsaw never lives up to its enticing marketing. It is, sadly, a portrait that hangs rather limply. 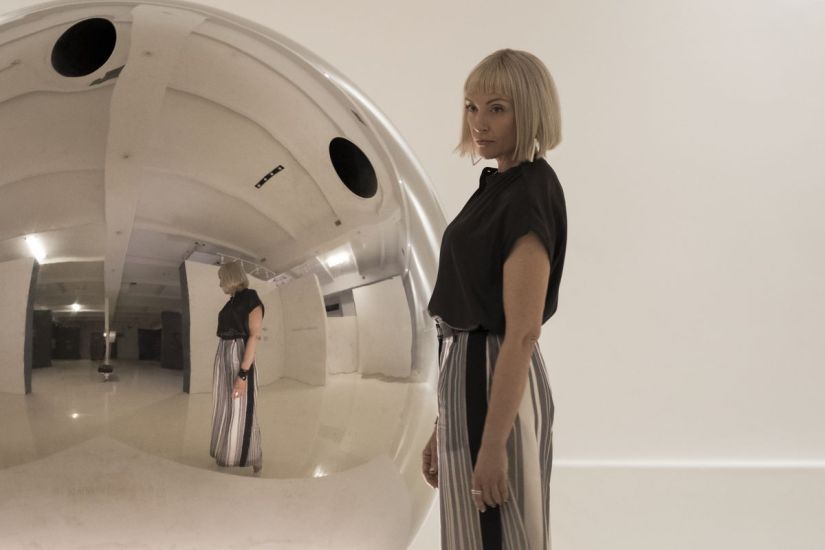 The pallet holding the paint to deliver thick coatings of raucous, menacing entertainment in the style of the very best postmodern blood-soaked satires (The Neon Demon; Map to the Stars) is there. However, both of Gilroy’s brushes remain fairly dry. Lacking in both imagination and enjoyably excessive explicitness to work effectively as a slice of straight-up, gruesome OTT-horror, its mockery is equally toothless – reluctant to journey beyond a plane dosed heavily in a one-shade sentiment that invites us to do little more than smirk at unredeemable individuals getting their comeuppance in ironic ways.

There are flecks of neatly constructed frolics, however. The film’s most memorable moment comes in the form of school children innocently playing in the blood of a recently dispatched victim at a gallery while the adults look on unassumingly, believing it to be part of the exhibition. Meanwhile, a nifty gag involving Natalia Dyer’s lowly, wide-eyed fashion intern Coco – and easily the film’s most accessible character – sees her doing a round-robin at all the big-name galleries but at each of them popping up at exactly the wrong time.

Working largely with broad strokes, Velvet Buzzsaw is hardly ambiguous. By the end, however, you’ll be screaming out for just a hint of finer, subtle intricacy.