Upon returning to his rural home town, Dr Faraday (Gleeson) becomes fascinated by the Ayers family, and after a series of sinister events, becomes entangled in the mystery of their home: Hundreds Hall.

With its deep and celebrated gothic literary roots, the haunted house story is one as old as cinema itself. From the shadowy archways and unsettling imagery of George Melies’ 3-minute silent The Haunted Castle from 1896, right through to the twenty-teens and James Wan’s supremely successful Conjuring series, it’s no surprise that anything on Airbnb that stands in a secluded patch of countryside, on an old Victorian estate, with a large staircase, a few cobwebs and too many windows ain’t going to garner much interest at all.

We’ve had the tour of Hill House, checked in at The Overlook, even spent a few nights aboard the intergalactic horror house, The Nostromo. Now, we’ve got another one to strike off the holiday list: Hundreds Hall. Except Lenny Abrahamson’s latest – an adaptation of Sarah Water’s 2009 novel – isn’t quite the things-go-bump-in-the-night paranormal jamboree that the setting would have us believe.

Upon entering the once lavish 18th century walls of Hundreds Hall, country physician Dr Faraday is, quite literally, stepping back into the past. Despite the peeling paint and decaying foundations, this is a place he has a deep affiliation to, having been enchanted by the place as a young child. Called out to assess the health of the house’s only remaining servant (Liv Hill) who has fallen ill, it quickly becomes apparent she is not sick, but in fact no longer feels content or comfortable shuffling along the empty corridors and inspecting the dilapidated bedrooms alone.

The house’s nominal owner, Roderick Ayres (Poulter) – horribly disfigured from his wartime experiences and suffering from severe PTSD – confines himself to his room and is rarely seen. His mother, Angela (Rampling) appears equally distant, still hurting from the pain of losing her young daughter, Susan. His sister, Caroline (Wilson), who Faraday quickly expresses romantic intrigue in, is the only member of the family who appears well-adjusted. However, she too is trapped, shackled by the weight of heritage, loyalty and legacy, tossing aside a bright future and social interaction as she goes down with the proverbial sinking ship that is the family home.

Each one of Hundreds Hall’s inhabitants reflects the very structure in which they reside. Hollow and cold; now a mere shadow of the vibrant lifestyle and immense wealth they once knew. Faraday too, as an outsider looking in, appears flat and unfeeling, and the lack of emotional outburst all-round gives Abrahamson’s film both a disconcerting, distancing effect, and an impressively effective encapsulation of the void left by conflict in post-war Britain. 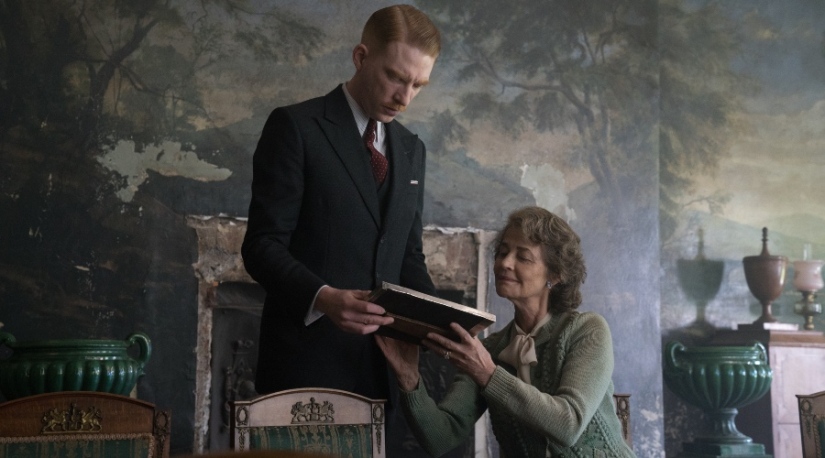 Far from conventional horror, this is instead a patient and enigmatic character study that explores psychology, class frictions and the power of memory. Unrushed almost to a fault, The Little Stranger isn’t one to rely on jump scares, but rather on a slow burning dread that manifests itself gradually and uncomfortably under the skin. Through subtle use of reflections and – like Abrahamson’s last film Room – clever focus on the spaces characters navigate through, The Little Stranger opts for unspoken clues, and suggestive breadcrumbs that boldly leave more question marks than full stops.

From Gleeson’s sharply dressed, up-tight doctor, to Poulter’s fractured war veteran, each of the cast are quietly compelling, without ever being truly memorable. Wilson is perhaps the most impressive, however; as an understated, vulnerable, convincingly conflicted soul torn between familial obligation and her own hinted-at desires and ambitions. From its title, to its characters, to its narrative, ambiguity is very much the name of the game here.

Some will revel in the eerie atmosphere Abrahamson and his cast build. Others will feel frustrated at the lack of visceral thrills. As such, The Little Stranger has the capacity to be both a welcome guest and an unwanted visitor.