After a young boy (Tremblay) inadvertently triggers their return, it’s up to a gaggle of mis-fit ex-soldiers, including sniper Quinn (Holbrook), and a biologist (Munn) to prevent mankind being besieged by a new breed of Predator – faster, stronger, and altogether deadlier.

There is something cyclically satisfying about the iconic Predator’s very first on-screen victim back in 1987 being the man to bring it all back again over 30 years later. Shane Black, more notable for his writing – Monster Squad, Last Action Hero and the first two films in the Lethal Weapon series – and directing credentials – Iron Man 3, The Nice Guys – and who had a brief and bloody altercation with the infamous heat-seeking extra-terrestrial as the unfortunate Rich Hawkins in the original cult-classic, now returns, this time as writer/director, to try and breathe new life into a franchise already three films deep – five if you count the two Alien Vs Predator spin-offs – and looking rather stale.

The question, therefore, is whether Black’s off-screen presence has a more impactful stamp on the Predator series than his on-screen one?

To answer that bluntly: no, not really. 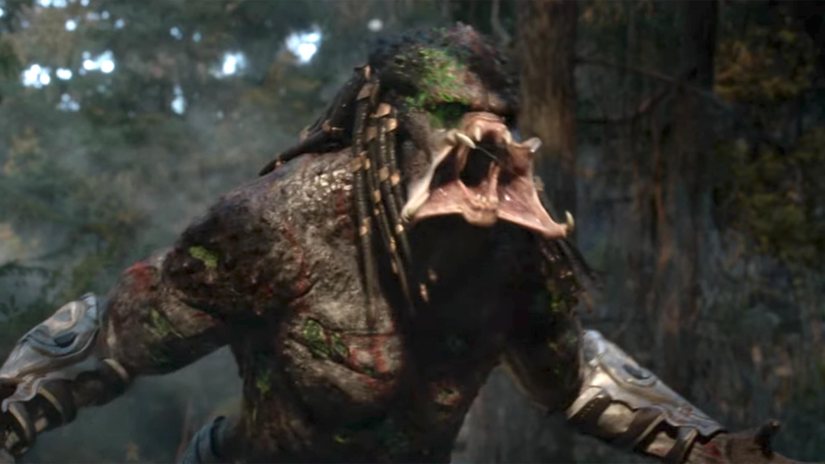 Slotting in the series timeline somewhere between Predator 2 and Predators, The Predator brings the horror home to American suburbia when the deadly, dreaded – in both reputation and hairstyle – titular beasties drop in for an earthly visit. But, this time, they’ve evolved – that, or they’ve had one serious MyProtein binge – and they’re on the search for something. What that ‘something’ is shall remain undisclosed, but if it’s a coherent or intricate plot (clue: it isn’t) then they’ll be looking for some time.

That’s because it’s pretty obvious from the get-go that The Predator, and its creator, are in it solely for delivering a rollicking, action-fuelled gore fest for long-time fans of the franchise. Despite throwing us some expositional bones – and even Pred-Dogs – we find very little meat in a set-up that immediately, and really only ever, draws parallels to the original: a group of macho outcasts go toe-to-toe with the Universe’s most lethal hunter in a bid to save the world.

Here, the Arnie archetype is taken up by the gruff, cocky leading man in Quinn McKenna – an ex-sniper who’s had previous contact with our otherworldly foe, and who has a son bullied because of his autism. Among the rest of the make-shift crew is the nicotine-addicted, former marine Nebraska (Rhodes); the comic, Hawkins-reincarnation Coyle (Keegan-Michael Key, of Key and Peele fame); and Tourette’s-sufferer Baxley (Thomas Jane).

It’s amidst these gaggle of ex-military that The Predator offers up some potentially intriguing characterisation, though. Each of them has a condition – be it PTSD, suicidal tendencies or run-ins with space creatures – that renders them unfit for duty and, in a nice reversal, aliens on their own planet. And, surprisingly, while other disposable military personnel stand-in as the sliced, diced, and dismembered cannon fodder, Black keeps his central team alive long enough, with enough camaraderie, for what we hope will be eventual explorations of such characteristics. Disappointingly, however, what we get instead are explorations into who can tell the most un-PC, out-of-sync-with-current-issues one liners – we’re talking sexist “Your Mum” jokes, insensitive mocking of characters with neuropsychiatric disorders, and even the word “gaylord”.

The film’s few saving graces come in the form of some neat, if not slightly shoehorned, references to the ’87 film – a certain ‘chopper’ gets a namedrop, for instance – which are sure to get die-hard fans’ juices flowing. And then there’s Olivia Munn’s Dr Casey Bracket; who shows up to do some science, before showing up those masculine men by being – for want of a better phrase – totally bad-ass. Elsewhere, the brilliant Sterling K. Brown does a sterling job with limited screen time as a government agent who, despite being pumped full of Predator knowledge, we’re not sure we like all that much.

If that still isn’t enough to keep you even slightly invested; hey, you could always try drinking every time the word “Predator” is mentioned – your opinion of the film isn’t likely to change, but you’ll have one hell of a night!

While it might serve up some neat slices of nostalgia for the loyal franchise fans, The Predator is, for the most part, one messy motherf***er!