Dennis “D” Campbell (Ameen) is a young boy growing up in 1970’s Kingston – a city living in fear from a ferocious street war between two rival gangs. When his elder brother Jerry Dread (Creary) is shot dead while attempting to bring about peace, D is lured into the world of organised crime with revenge very much on his mind.

Yardie – a Caribbean colloquialism applied to someone of Jamaican origin, but also those involved in criminal gangs – is a film about paths.

Its director has walked many – not least the long one to freedom playing Nelson Mandela in Justin Chadwick’s 2013 biopic. There’s the on-screen one – garnering a substantial fan base both across the pond as drug kingpin Stringer Bell in The Wire, on home soil as gruff, unorthodox crime fighter DCI John Luther, and everywhere else as Heimdall in the Thor and Avengers films. There’s the behind the decks one – under the moniker DJ Big Driis. Then there’s the tux-wearing, shaken not stirred one…perhaps. And now, there’s the filmmaking one.

Whether great actors make great directors has long been the topic of debate throughout the film world. History has given us a mixed bag. Coming as the directorial debut from Idris Elba, Yardie – based on Victor Headley’s 1992 novel of the same name – epitomises such a mixture, as a violent tale of vengeance that is at times intriguing and intricate, but largely frustratingly uneven. 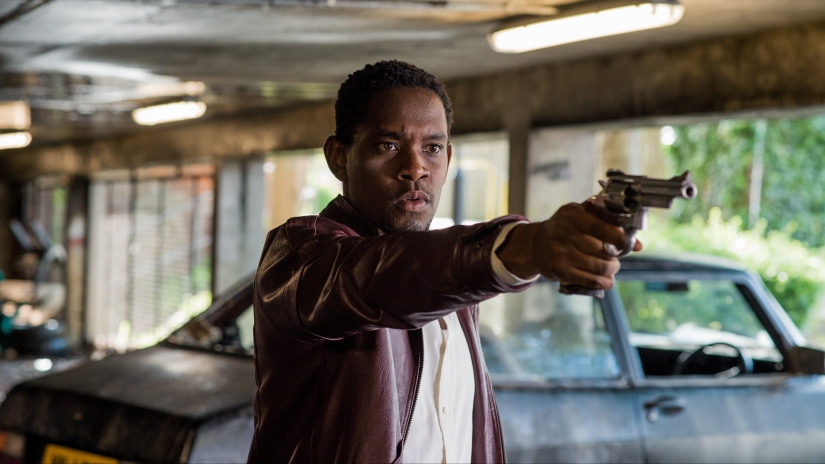 Taking the conventional crime drama and setting it against the backdrop of 1970’s Jamaica, and later, 1980’s London, Elba’s film follows the journey of Dennis “D” Campbell (played at first by Antwayne Eccleston and later by the impressive Ameen): a man raised into a world of criminality after his brother’s murder. It’s a journey that that will take him over continents; from a dense, green jungle to a concrete one, carrying an aggressive, unshakeable desire for revenge – one that will quickly lead him to some pretty ugly situations with some rather unpleasant folk.

In a brisk opening shot in the style of Fernando Meirelles’ mesmerising City of God with a Goodfellas-esque voiceover narration, Yardie very quickly establishes its key players. There’s the crimelord-cum-surrogate-father figure, King Fox (Shepherd) who has connections in London town; the childhood sweetheart, Yvonne (Jackson); the rival; and the peaceful older brother – a.k.a the symbolic ‘righteous path’ – which is swiftly, and brutally eradicated. D, however, remains the narrative focal point throughout it all, and we enter this violent, but occasionally warm, existence through his young eyes.

In many ways, Yardie owes a great debt to Meirelles’ work in its commendable commitment to a specific identity – through language, dialect, music and colour – but rarely does it match the same honest rawness. Instead, Yardie quickly follows familiar narrative conventions as D is thrown in with the big boys of London’s east end criminal underground, where he not only finds the man responsible for his brother’s death, but also a dabble of unlikeable genre caricatures – most notably Stephen Graham’s predictably unpredictable Rico, an eccentric, coke-snorting, gun-toting druglord who spouts Jamaican-cockney fused twangs while chewing up Production Designer Damien Creagh’s dazzling period scenery.

It often feels like Yardie is really two films in one. In its unevenness, Elba ineffectively juggles an interesting, intimate character study of young shoulders struggling to carry guilt, grief and family responsibilities with a far more thinly drawn, familiar story of retribution where, by the end, we – as well as the characters themselves – have learned very little from their own physical and figurative journeys. Sadly, in the end, we are left with an unquenched thirst for a little bit more.

That said, Yardie is a film with which Elba – given his own interests away from film – has clearly been given the creative reigns to put his own audio-visual stamp on. And although the film’s musical sub-plot – D’s budding friendship with a trio of resident reggae DJs – doesn’t ever really fit with the rest of the film, Yardie is at its best during its fleeting moments where Elba masterfully utilises music to transcend speech – most notably during an early party scene where D and Jerry Dread crank up the wonderful chimes of Carlton and the Shoes’ 1968 song Love Me Forever in an attempt to encourage peace between Kingston’s two rival gangs.

All the right notes are there but are in need of finer tuning. Room for improvement? Yes. The last we’ll hear from Idris Elba as director? Hopefully not.