Following the death of his father, T’Challa (Boseman) is officially crowned as Wakanda’s king and, with it, granted the powers of the Black Panther. But soon, there’s trouble in technological paradise, as his kingdom is threatened by outside forces – in the form of an infamous arms dealer (Serkis) and a former black-ops soldier (Jordan) with a complicated past.

Hype. Black Panther has redefined the very meaning of the word. Grossing a gargantuan $202m on opening weekend – and bringing home a further $108m the following weekend – tells you pretty much all you need to know about how much audiences have been gearing up for this one. But Hype isn’t the only thing to have been redefined by Black Panther. Oh no, Coogler’s film has also redefined what it means to be a Marvel film. Far gone are the days when superhero films were little more than rich white billionaire business men running around in metal suits, long-haired L’Oreal models from far-away galaxies with a strange affection for DIY tools parading about in capes, and large green men whose anger clearly compensates smallness in other bodily areas.

Well, until Infinity War comes bounding into town, that is.

For now, we’re invited to bask in the sun of the fictional African nation of Wakanda – and bask we will.

Coogler’s Black Panther is a different beast altogether. Not least because of its mightily impressive cast of almost exclusively black actors (Freeman and Serkis – Bilbo and Gollum – show up for a bit of neat role-reversal); but the film brings with it its very own identity – a unique voice that is impressively maintained throughout, even when the lure of convention is at its most potent. And Black Panther is all the better for it.

Welcome to Wakanada: the country of technological wonder located in the beating heart of dense African jungle and soaked in the cultural shores of Afrofuturism. And the newly appointed King of these Vibranium-rich lands is T’Challa – the latest in a long line of Black Panthers – who, along with his band of loyal followers – former lover and war dog Nakia (Nyong’o), head of the all-female special forces Okoye (Gurira), best-friend and confidant W’Kabi (Kaluuya), and younger sis-slash-techno wiz Shuri (Wright) – is tasked with maintaining the peace and secrecy of his country, despite the struggles of the world around them.

And T’Challa epitomises righteousness to a T; putting country before crown, and tradition before temptation. And Boseman oozes charm and finesse from the outset – whether he’s riding atop a sports car during a high-speed chase on the streets of Busan, or waterfall grappling with Winston Duke’s scene-stealing M’Baku.

But despite T’Challa’s nobility, it is Ryan Coogler who is the true hero in all of this. It feels like he’s been around forever, but at just 31, he really hasn’t. If Fruitvale Station was his stand-up-and-be-counted film, and Creed his fight-my-corner film, then Black Panther is undoubtedly his marvel-at-me film. And with good reason, too. With Wakanda, Coogler – along with the impressive eye of Oscar-nominated cinematographer Rachel Morrison – has wonderfully crafted a world of vibrant colours, settings, and architecture; of dazzling costumes; of ice-cool soundtracks, bad sneaker jokes; and some neatly unconventional characterisation.

And with the latter, you need look no further than that of long-time collaborator Michael B. Jordan. It stands to reason that a superhero film is only as good as its villain, and with Killmonger, Coogler has constructed one so layered, so complex, so morally grey, that, at times, we almost find ourselves rooting for him. And given more screen time, we probably would be…

Far and away the most intriguing character on offer here, it’s certainly a bold move, but one that pays-off with poignant potency, as Coogler feeds to us an antagonist who carries with him a powerful backstory that injects the fictional world of Wakanda with a heavy dose of sobering reality, and a voice that elevates Black Panther to much more than simply another studio instalment. 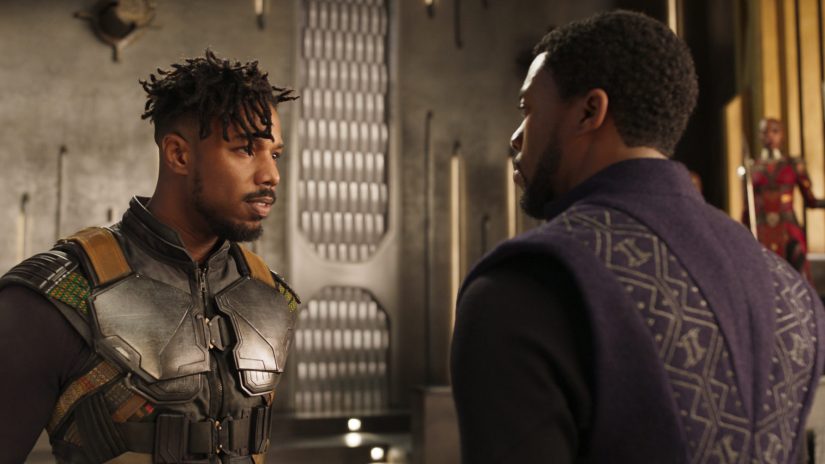 But for all its roars, Black Panther isn’t without its fair share of meow moments, too. The narrative itself is nothing new, hitting all the same notes, in all the same places, at all the same times. The dialogue too feels a tad thin in places – “Did he freeze?” “Like an antelope in headlights” – and more than a little contrived in others – “I will not abandon someone to die, when I have the means to save his life.” Although there’s occasional power in its words – “We all know the truth: more connects us than separates us. But in times of crisis the wise build bridges, while the foolish build barriers” – Black Panther is a film much more about the ‘big screen’ than the ‘big screenplay’.

And despite the power of a villain we can empathise with, elsewhere, there are perhaps a few too many characters thrown into the mix, meaning that, somewhat inevitably, some end up being far less developed than others. That, and the lack of any substantial Sterling K. Brown screen time, is altogether disappointing.

Ok, so that last one might just be personal preference.

In trying not to let the cat out the bag, Black Panther isn’t purr-fect, but it certainly has some impressive, shiny claws. The most off-piste superhero film since Logan and arguably the most important movie of the year; on this showing, superhero films and Ryan Coogler just, well, seem to suit.