Elisa (Hawkins) cannot speak. Neck scars from a childhood incident have left her mute for most of her life. In Cold War America, she cleans at a government laboratory where she’s expected to keep everything under wraps and question nothing. When she witnesses merciless acts of violence inflicted upon an aquatic, humanoid creature, she vows to save him. But deeper feelings soon begin to surface…

Take your classic Beauty and the Beast plotline, give it a Cold War makeover, leave the taps running and send all manner of talking furniture to the car boot, and what do you have? One hefty water bill and a week of drinking tea from an empty jam jar, probably. But, add in some del Toro visual sparkle, narrative razzmatazz, some Doug Jones aquatic monster-ing and a rather wonderful Sally Hawkins, and what do you have now?

A scale as old as time…

To anyone who hasn’t immediately closed this page, deleted any trace of having ever visited this site, and is remarkably still reading: firstly, thank you – we clearly have the same (lacking) sense of humour. Secondly, I imagine you’ll be wanting to know whether The Shape of Water lives up to its THIRTEEN Oscar nominations hype?

Well, ironically, the most fitting encapsulation of the film comes right from the pages of del Toro’s very own script. “When he looks at me” Sally Hawkins’ mute Elisa confesses through sign, “the way he looks at me… He does not know, what I lack… Or – how – I am incomplete. He sees me, for what I – am, as I am.” The Shape of Water isn’t without fault, not by a long way; but instead of viewing a film of narrative done-befores, we see a work that his wholly majestic, wonderfully meticulous, and almost incomprehensibly beautiful. 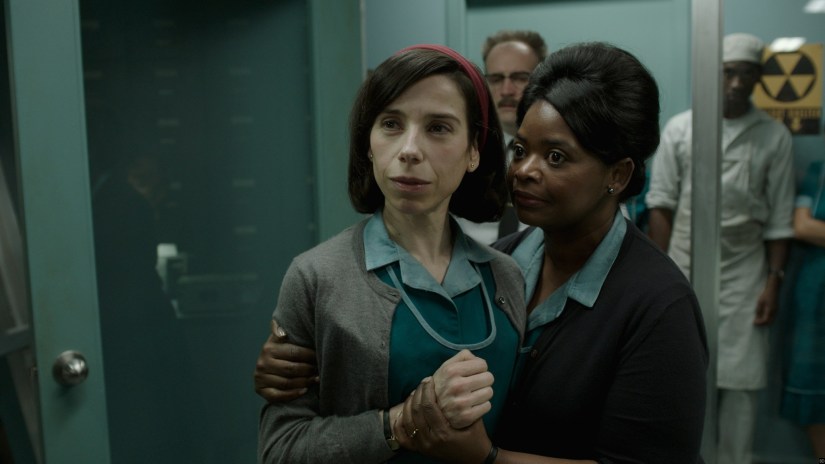 Elisa leads a quaint, if not slightly unremarkable life. Her days are spent watching old black and white musicals with compassionate neighbour Giles (a near perfect Richard Jenkins), and her nights spent cleaning the bathrooms and sweeping the floors of a secret government lab with sassy co-worker, Zelda (Spencer).

But Elisa cannot speak – at least not with words. Her entire experience of the world comes through what she hears and what she sees. An unspecified neck injury sustained during infancy means sign language is her only means of communication. That is, until the day a rather extraordinary, and highly valuable ‘asset’ is delivered to the laboratory.

In a film all about sight and sound then, it’s no coincidence that The Shape of Water is an audio-visual delight. del Toro’s film is one that transcends language and the triviality of words. Timeless themes of attraction, love and companionship soak the narrative through far less conventional means; explored richly through the eyes and the ears; through vision and through music. A marvellously constructed set-piece involving a locked bathroom and an overflowing bathtub – just one of many memorable scenes on offer – says more about intimacy and affection than any combination of vowels and consonants ever could. If Pan’s Labyrinth was del Toro’s masterpiece, The Shape of Water is his graceful love letter to cinema – a celebration of the moving picture in it’s very purest form.

And while it might hit all the familiar narrative checkpoints, and of course revel in those questions of who the true monster is, this is one gorgeous, delicate, mesmerising cruise, washed lavishly with both homage – The Creature from the Black Lagoon, Beauty and the Beast, of course, and even Free Willy – and del Toro’s propensity for running themes and stylistic recurrences – in this case, the use of water (surprisingly), windows, and the colour green. 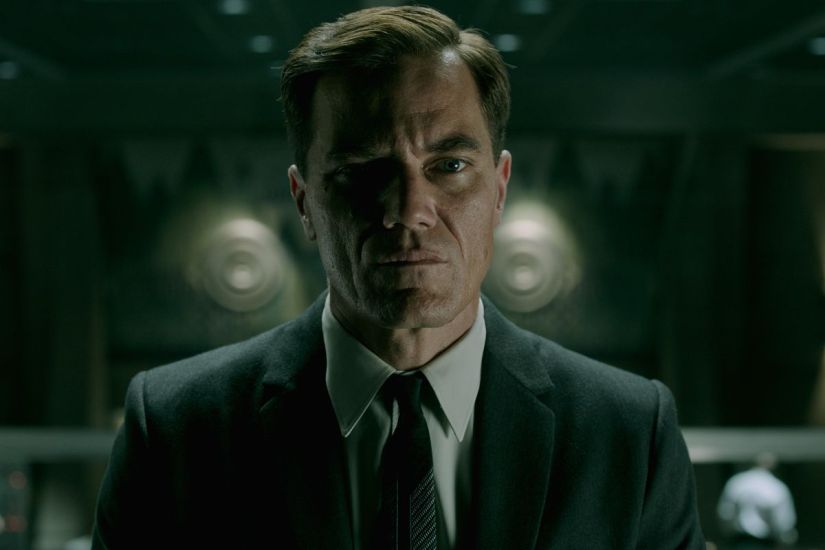 There are wonderful performances at every turn. Spencer and Jenkins more than earn their Oscar noms – the latter having arguably the film’s most heart-breaking character arc – while Shannon is typically brilliant as the menacing, archetypal villain; bullish in stance and demeanour, but reptilian in body – complete with quirky, character-defining idiosyncrasies.

Long-time del Toro collaborator Doug Jones once again shows everyone how monstering is done properly; combining imposing physical stature with gentle tenderness, and an almost infant-like curiosity. It’s yet another gold star on Jones’ increasingly commendable body of work, and a performance that’ll inevitably suffer from Serkis syndrome, and be unfairly overlooked.

But The Shape of Water’s true ocean pearl is, without question, Sally Hawkins. As Elisa, she brilliantly blends vulnerability with strength, fragility with feistiness, and silence with deafening characterisation. Hawkins totally fits the bill (or should that be Belle) here; and not since a certain cartoon elephant with large ears has a mute character stolen our hearts quite so impressively.

The Shape of Water proves that romance is far from dead. As it turns out, just add water. Water, and some del Toro fairytale twinkle.