As Nazis push the Allied forces back to the confinements of the Northern French coastline, the British army struggle with the approaching threat from mainland Europe, and the dwindling probability of making it back across the Channel alive. Their only hope of salvation comes in the form of a couple of brave RAF pilots, several plucky fishing boat owners from the shores of Blighty, and that survival-shaped impulse that exists within every soldier.

If you look up ‘Spectacle’ in the dictionary, chances are Christopher Nolan’s name will appear somewhere in the definition. Be it down the dark avenues of a bleak Gotham city, atop the snowy peaks of the subconscious, or along the outer reaches of galactic imagination, the man is pure cinema. With one eye for blockbuster, and the other for arthouse, each venture he takes us on is layered thick with wonder and constructed with the combination of broad and delicate strokes found in the finest of landscape painters. Despite personal trepidation stemming from an underwhelming trailer, I am ecstatic to report that Dunkirk continues Nolan’s increasingly distinctive style, and is yet another example of his ability to rattle the boundaries of cinematic possibility. Put simply, Dunkirk is nothing short of a masterpiece. 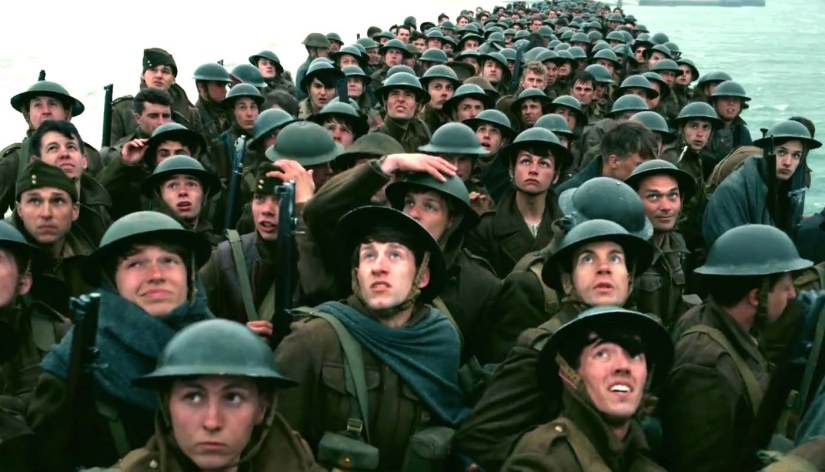 If the other big World War II film of 2017 so far – Gibson’s Hacksaw Ridge – was a graduate from the Saving Private Ryan school of filmmaking, Dunkirk comes from an entirely different war film curriculum altogether. The result: a work of subversive cinematic artistry the likes of which the genre has rarely seen before. The brutal, beautiful The Thin Red Line is perhaps the closest relative, but whereas Malick’s film was a poetic, all-encompassing powerhouse of a film about War, Nolan’s Dunkirk is exclusively War Film.

Weaving a three-pronged narrative with three different timelines with simultaneous disconcerting, seamless mastery, Dunkirk mercilessly thrusts us into the hellish chasm that is war – from land, air, and sea – with no intention whatsoever of ever lifting us out. We begin on foot, with young British Private Tommy (Whitehead) who, after escaping enemy fire, makes it to the titular beaches where the British are attempting mass evacuation. Visibly shaken and fatigued, he soon teams up with fellow privates Alex (Styles) and Gibson (Aneurin Barnard) in the hope of escape. We then jump to the waves, where atop the bleak, watery greyness that separates 400,000 men from safety, Rylance and co. begin their plucky rescue mission aboard a fishing boat. And finally, we take to the skies with RAF pilots Collins and Farrier (Lowden and Hardy, respectively) as they clock up the air miles above the carnage below. It’s at this point that genre convention dictates that amidst the sand, sky, sea, and slaughter, a tale of comradery and brotherhood will quickly manifest. However, what we get in its place is a non-linear helter-skelter of a narrative, that feels like one, long action sequence stretched to feature length; one in which war-time heroics have no place, and where character name and backstory hold very little narrative weight or importance. Instead, Nolan’s film is one solely concerned with human survival, and just how much men can endure.

But such a test of endurance isn’t designed merely for those on screen. No, no, at times, this an unbearably stressful watch – at its height during an intercutting scene of characters struggling not to drown – made unfathomably more nail-biting by the ticking chords of Hans Zimmer that are as much a threat to the ears as the shrieking destruction of fighter plane fire. Yet, despite at times teetering close to the 15 side of its 12A classification, Dunkirk reigns in both dialogue and blood-shed in favour of an altogether different experience where both sight and sound, visuals and score, Nolan and Zimmer (on blistering form throughout), conspire to both beautify and brutalise the screen before us; but crucially never lessening the film’s intensely powerful, harrowing magnetism.

Amidst the hype, there has been a lot of noise made about the film’s snappy run time; and yet, while the debates over whether this is his best will rumble on, this is undoubtedly Nolan’s most intricate, absorbing, and accomplished work to date. Tommy might well be the silent vessel through which the audience enters the mayhem, but truly there are no real protagonists here; there is only the feeling that each player is a tiny part of something much bigger. There are no rousing speeches, fleeting moments of fist-pumping triumph, and few figures of real authority, save from Branagh’s Naval Commander, and yet there remains a flickering hope and resounding unity in the face of the gravest helplessness and vulnerability. And deftly, Nolan places the majority of this upon the shoulders of his younger, lesser known cast members. Big hitters Rylance and Branagh himself, along with Nolan stalwarts Murphy and Hardy, take the proverbial back seat as the brilliantly understated emotional heartbeat and organically constructed moral dilemmas are harnessed by the talents of Whitehead, Glynn-Carney, and the unexpectedly impressive Styles. Never manipulative (perhaps with the exception of one sub-plot involving Barry Keoghan’s George), Dunkirk is easily the most engrossingly rich, striking, and immersive movie experience since The Revenant. Here’s hoping it will retain its mesmeric visual prowess come DVD-release time.

Dunkirk is how cinema really should be done. Utterly breath-taking.