After washing up on a desert island, a nameless castaway’s attempts at escape aboard a makeshift bamboo raft are constantly thwarted by a large, red turtle. Slowly accepting and adapting to life on the island, his solitude is ended by the strange arrival of a woman.

I was going to begin by attempting a gag about The Red Turtle being a Teenage Mutant Ninja Turtle spinoff in all its cowabunga-ing glory, but to do so would not only be terribly unfunny, but also distract from the fact that The Red Turtle is a mesmerising, beautiful work of visual and aural cinematic artistry.

It’s been a week since Captain Sparrow and his band of rather bland pirates pissed in our cinematic oceans, but fear not folks, because Michäel Dudok de Wit’s watery masterpiece The Red Turtle is one sea you’ll want to forever bask in. A French-Belgian-Japanese co-production, the result is a mesmerizingly coloured, gorgeously realised animated fable which – save for the occasional “Hey” – is dialogue free. 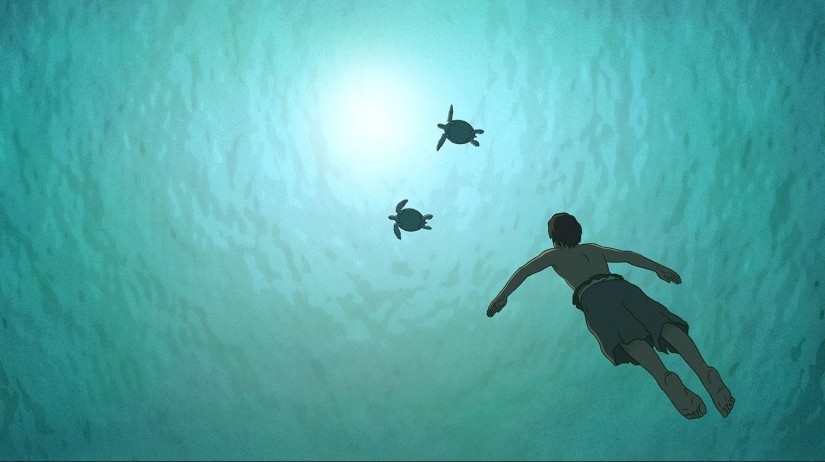 More mainstream animated films have, in recent times, harboured their success on crafting quirky, memorable characters against magical backdrops, and more than a few chart-topping musical powerhouse numbers. Dudok de Wit quite literally lets it all go here, however; there is no speech, no songs, and yet there is a different, but equally enthralling, magic to be found. Right from the opening scenes of a violent sea storm, the sights of nature are established as the supporting players here, and the orchestral sounds of nature the soundtrack. Nearly every scene has in it somewhere an insect, crustacean, or fish, played out to the patter of falling rain drops, the crunch of leaves or the trickle of water. Crucially, however, despite its beauty, Dudok de Wit’s version of nature also has its rawness. Dead baby turtles, washed-up seal carcasses, and crab appetisers all act as a reminder that death exists just as prominently as life here; that there is bleak reality upon a vast canvas of colourful creation. And at its centre, is the image of man battling with the equal beauty and hardships of nature, and – during the film’s beautifully crafted surreal moments – his own sanity.

It’s a patient narrative approach that does that wonderfully spellbinding thing of appearing minimalist on the surface, but lying beneath is a truly deep and meaningful thematic current that masterfully sweeps you along with it. As well as the alignment of life and death, this is a film that also brings together binaries of sea and land, day and night, beauty and destruction, paradise and purgatory, into a poignant and heart-breaking examination of the cyclical nature of life itself – birth, death, and re-birth.

The score – that of Laurent Perez del Mar – compliments the symphony of nature’s sounds with such breath-taking emotion and power that you’ll be hoping such hypnotic tones aren’t spoiled by something as trivial as dialogue. Silence is the true pearl here, in a work that transcends boundaries of language, culture, race, and even species.

Perhaps its greatest achievements, however – its enigmatic mystery, minimalist visuals, and unconventional storytelling – are also its greatest downfalls. While I am in no way indicating that animated films have an unspoken duty to pitch its level of intellect, complexity or convention to a certain audience, The Red Turtle, through its very craft, might just be both too thematically inaccessible for many younger audience members and slightly too absent of meaning and exposition to truly reach and engage some older viewers. But these are merely tiny ink blotches across a wide and beautiful landscape.

Marvellous and enthralling, The Red Turtle really is a hero in a half-shell…

(There we go, got it in there eventually…!)