As we begin the countdown to the festive season and welcome the inevitable excitement and anticipation that comes with it, Denis Villeneuve’s powerful, poetic, and aptly entitled Arrival comes to us as a timely reminder of the current global socio-political climate and the worldwide uncertainty that encapsulates – and ultimately binds – us all.

Based on the 1998 short story entitled Story of Your Life by Ted Chiang, when 12 identical alien vessels appear in the skies at various places across the globe, Linguistics Professor Louise Banks (Amy Adams) is enlisted – along with Physicist Ian Donnelly (Jeremy Renner) – to help decipher their inhabitants’ language before widespread panic and paranoia starts to dictate actions.

The irony of Arrival is that for a film centred around language and the underlying question of how we communicate, there is an overriding silence at work here. Despite clear nods to mainstream sci-fi of the past – films like The Day the Earth Stood Still and Independence Day – Arrival for the most part runs against the grain of such works by replacing the loud bangs and explosions with a much slower-burning, quieter and altogether richer narrative. Jóhann Jóhannsson’s deep, beautiful score fills our ears only a select number of times, because, for the most part, it is the ideas and questions the film throws at us that act as the most poignant of soundtracks. In doing so, the true silence derives from the damning realisation that we as human beings simply may not have the answer to such questions. Far from the conventional linear extra-terrestrial narrative – as much of the films marketing might lead you to believe – this is a much deeper, complex and far more interesting exploration into the concept of first contact. 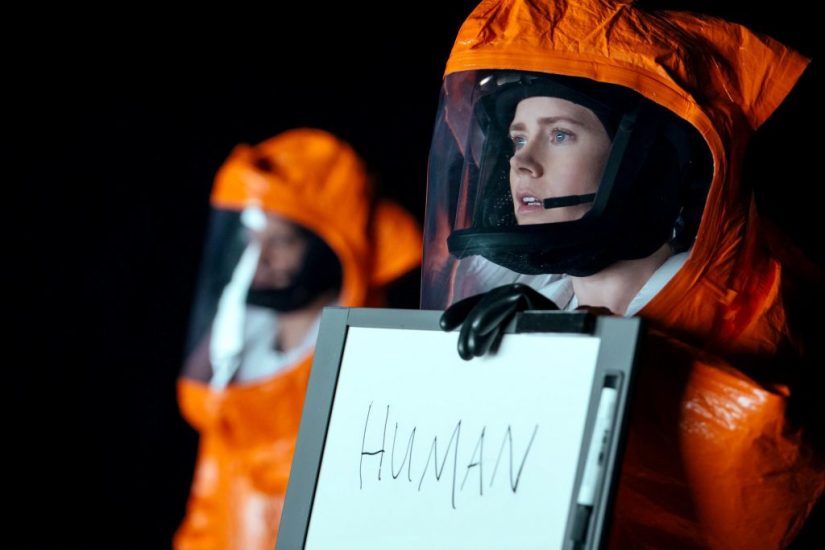 From minute one, as Amy Adams’ voice-over punctuates the blackness before the camera’s slow pan from ceiling to living room, there is a feeling of the everyday that exists throughout Arrival. After all, this is a film as much about humanity than it is about the extra-terrestrial; as much about looking inside as it is about looking up. As character driven sci-fi – which is by no means unfamiliarity territory in the genre – Villeneuve’s expert grasp of pacing and calculated narrative approach means that our grieving hero is far from just an emotionally manipulative character cliché, but a protagonist whose trauma is elegantly weaved into the narrative so that is has true relevance. That is not to say that Arrival is completely cliché-free, and there are a few instances where the conventions of the genre appear to get the better of it, but after a summer of disappointing, artificial blockbusters, it is pleasing that we end the year with a work that feels so refreshingly organic.

The cast all lend themselves perfectly here, too. As Louise Banks, Adams is the glue holding it all together; she offers an acute and measured depiction of frailty, loneliness, determination and confidence. Renner, whose character is given far less exploration than one might expect, gives a more subdued performance than in his recent Marvel outings, but remains the all-important comedic relief to the emotional weight Adams brings. Whitaker’s role feels frustratingly one dimensional for an actor with his talents, but altogether necessary in a film where military action appears redundant when compared to the power of language.

Arrival is quite simply a breath-taking, cerebral cinematic experience.  Saying as much about the world today as it does about a world where extra-terrestrials have landed, this is very much a film soaked in social and historical significance, with a strong emotional core running through that is difficult not to be moved by. Science Fiction has rarely been this profound.